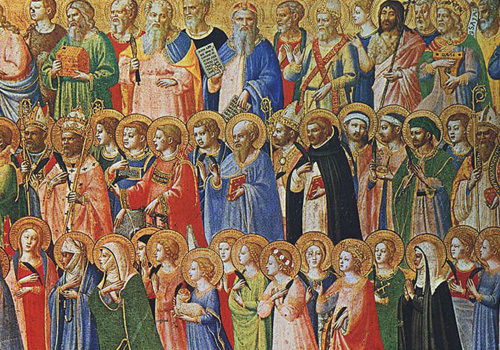 With his unique way of greeting, Monsignor Tom Wallace reminds us of our baptismal call

The first time he called me that I did a double take. I may have even said to myself, “yeah, right. Me, a saint.”

But at that point I didn’t know Monsignor Tom Wallace and his philosophy on everyday saints. If you’ve interacted with Msgr. Wallace much, he’s probably called you a saint, too. He is an optimistic and affirming priest who recognizes the saintly qualities of those with whom he ministers, so much so that he makes a habit of calling you one.

On the Solemnity of All Saints, we venerate those holy men and women who have been canonized by the Church. At the same time, we reflect on how we can follow their example in our own lives, and who among us is living out the kind of holiness that would earn them a shout out from Msgr. Wallace.

What better way to praise that kind of faithful persistence than to call someone a saint, Msgr. Wallace figures.

“There’s nothing wrong with affirming people of their baptismal goodness,” he says.

Msgr. Wallace is the first priest ever to be ordained for the Diocese of San Bernardino. He has pastored many parishes, led ministries and served as the Episcopal Vicar for the Riverside Pastoral Region. He currently serves as the Director of the Diocesan Office of Mission. He gets many requests to celebrate Mass around the Diocese because of his affirming style and concise homilies. He’s a favorite amongst the Catholic students at Cal State, San Bernardino, says Sister Pesio Iosefo, S.M.S.M., Campus Mnister.

“He’s someone who knows the heart of Jesus,” Sr. Pesio says. “Everyone is the same to him. There’s no ‘class’ in his life.”

Msgr. Wallace calls his outlook a lifetime habit and an intentional act. “It’s easy to see their goodness, but you know why? I look for it.”

Those who have ministered with him for any length of time say his positivity is infectious.

“You can’t help but smile when you see him,” says Sister Linda Nicholson, CSJ. “He really calls people to be saints.”