Parishioners would often leave flowers at the feet of Our Lady of Lourdes, the apparition of the Virgin Mary that occurred in France in 1858, and St. Bernadette. The two statues are the focal points of a large raised planter with a built-in place to pray. The faithful not only come here for quiet reflection but for celebratory photos after Baptisms and First Communions. The ruination of something so cherished shocked parishioners when it was announced during Mass.

“I was sort of speechless,” says Jose Barajas, parishioner. “So I wanted to come out and show there may be evil in the world, but at the end of the day the church comes together.”

On February 25th, a church security camera captured the suspect as he leapt onto the planter and repeatedly bashed the statues. Despite the video, the Montclair Police Department say it’s made no arrests. The problem; the video is too dark and grainy.

“We need better cameras and more lights,” Fr. Clarence explains while pointing out areas in front of the church. “We’re also going to add fencing around the statues.” 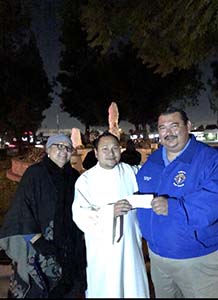 Our Lady of Lourdes hopes to raise $10,000 to make those improvements. That’s on top of the $5,000 already needed to replace the statues. The parish is also exploring the less expensive option of restoration. Fr. Clarence says while more donations are essential, there’s been a financial “outpouring” from those who love the parish and its school. Alumni Lisa Contreras launched a GoFundMe page and the Knights of Columbus immediately wrote a check for $1,000. The organization’s State Deputy happens to be a parishioner.

“This is a total travesty,” says Knight Jose Salaiz. “I just couldn’t believe this happened. I sent emails out to local members and asked them to come to the vigil and pray with me and my wife.”

And they did. Local Knights and their families say they wanted to be a part of the emotional mending.

“After my husband found out, we just wanted to support. We felt so horrible about what happened,” explains Dawn Chabolla, St. Joseph Catholic Church, Upland.

Similar sentiments were echoed among vigil attendees but there was not a word of anger towards the perpetrator.

“I feel that there is space for forgiveness and for him to repent,” says Lopez.  “He could come back. We’re here with open arms. There’s no judgment, there’s only one that can judge.”

Fr. Clarence says while the crime hit the church right at the heart of its spirituality, the vigil put that pain in perspective.

“The community prayer allowed people to have compassion and not just react, not allow their emotions to overtake their capacity for understanding. It really helped the healing process.”

Fr. Clarence says the statues will either be repaired in the coming months or replaced by the end of the year.