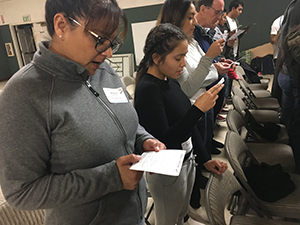 RIVERSIDE—About 114 pilgrims from all six Vicariates in the Diocese of San Bernardino are less than a month away from seeing Pope Francis in Panama City.

On December 1, the group met for a 12-hour overnight retreat at the Assisi Center at Queen of Angels Church

in Riverside, the final in a series of three retreats designed to prepare them physically and spiritually before embarking on the 12-day pilgrimage to the 34th World Youth Day in Panama next month.

The pilgrims brought their sleeping bags for the evening and were asked to wear a backpack throughout the evening.

“Our goal is to give them an experience of World Youth Day tonight,” said Brenda Noriega, Coordinator for Young Adult Programs for the Diocese and lead organizer for the WYD pilgrimage to Panama. “I really hope that their experience in Panama will be transformational and guide them through a conversion. That they fall in love with the Church as they fell in love with their community. And that they see their companions as not just for this journey but for the rest of their lives.”

The evening kicked off with the official hymn of the 34th WYD, “Here I Am, The Servant of the Lord,” followed by the group reciting the WYD prayer together. Just before midnight, the group celebrated Mass and later they were divided into small groups to visit the Church for Adoration of the Blessed Sacrament. The pilgrims also enjoyed food and games throughout the retreat, which ended at 6 a.m. the next morning. They will gather again on January 12 for a sending forth Mass with Bishop Gerald Barnes at Our Lady of Hope Church in San Bernardino.

In 1984, Pope John Paul II invited young people around the world to join him on Palm Sunday in St. Peter’s Square for the International Jubilee of Youth. Thrilled at the sight of seeing more than 300,000 people at the celebration, he announced the institution of WYD the following year. The first official WYD took place in 1986 in Rome.

The upcoming pilgrimage begins in Costa Rica for “Days in the Dioceses” with the local people and culminates with a Holy Mass in Panama City celebrated by Pope Francis, drawing thousands of other faith-filled pilgrims from around the world. The group consists of people as young as 12 years old, who will experience World Youth Day for the first time, and seasoned pilgrims in their sixties.

Reyna Tinajero, co-organizer for the WYD pilgrimage to Panama, has been to several local youth congresses. Next month’s pilgrimage will be her first WYD experience.

“I think meeting people internationally and meeting people from different countries who celebrate the same faith will be wonderful to see,” said Tinajero. “Experiencing it hands on is something that motivates me to see Christ through other people through other nations.”

Seventeen-year-old Laylah Ruiz, also on her first WYD trip, is excited for the rare global opportunity.

“I’m excited to see that we’re going to get to meet the Pope and gather as one community,” said Ruiz. “I’m hoping to grow my faith, gain more friendships and meet people from all around the world.”

For Alicia Adajar-Duante, Panama City will be her fourth WYD trip, and like St. John Paul II, she is always amazed by the youth.

“I love to see the strengthening of faith of our young generation,” she said. “I want to also meet and mingle with the Panamanians and also learn their traditions.”

The group will travel with three priests from the Diocese and leave California on January 17.