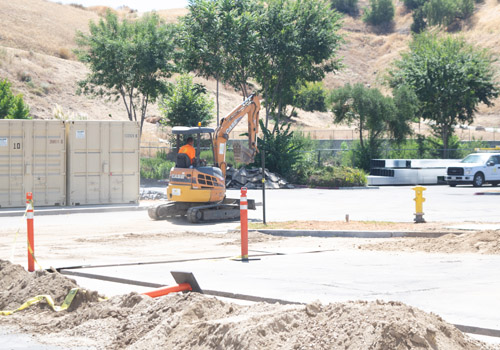 You might be sick of high temperatures and the summer sun but diocesan leaders say, ‘let there be light!’

That’s because the Pastoral Center is joining a growing list of local parishes that are harnessing the region’s abundant sunshine to power its facilities.

The Diocese broke ground on its Solar Energy Project on August 16th. The construction consists of 1,011 solar panels designed to produce more than 543 kilowatts of energy. The panels will be installed on a new carport that includes two charging stations for electric vehicles. Additionally, drought tolerant plants and decomposed granite will replace some traditional grass landscaping.

Bishop Gerald Barnes requested the renovation following Pope Francis’s Encyclical Laudato Si that discusses the environmental crisis from a spiritual perspective and the recent Pastoral Statement of the California Bishops that challenges churches to take action.

“Our Diocesan Solar Energy Project is one way to show we are serious about answering God’s call to be good stewards of his creation,” says Bishop Barnes. “It is my prayer that this will help all of the faithful consider how they, too, can honor this responsibility in their everyday lives.”

The Diocese purchased the solar carports from Renewable Energy Partners in Corona for $730,000. That money should be recouped in about nine years through electricity cost savings, according to the Diocesan Office of Construction and Real Estate. The Diocese is hopeful that the new system will shrink electricity costs by 75% or about $7,500 a month, meaningful saving for the diocese.

“We have a lot of consumption of electricity because we have about 150 employees here at the Pastoral Center. This place runs seven days a week,” explains David Meier, Director of the Office of Construction and Real Estate. “We’re doing our part as a Diocese to help the environment.”

So much so...Renewable Energy Partners says the carbon offset of the project is equivalent to taking 44 cars off the road for one year.

The second section of the California Bishops’ Pastoral Statement, God Calls Us to Care for Our Common Home, specifically calls on (Arch)dioceses in California to “examine their institutional operations to determine the full extent that each can adopt renewable energy, energy efficiency, and water conservation practices.”

“It’s very joyful that we are leading by example in our call to care for creation,” says Sister Hortensia del Villar, S.A.C., who chairs the Diocesan Laudato Si Committee, the group that offered the initial suggestion that the California Bishops develop a pastoral statement on environmental stewardship.

Some parishes of the diocese, particularly in desert areas, embraced the call to renewable energy years ago by going solar. St. Junipero Serra Church in Phelan did so out of necessity in 2005 when natural gas was unavailable. In the last decade, both Our Lady of the Desert, Apple Valley and Sacred Heart Church in Palm Desert also converted to solar. The savings on electricity bills over the years have now covered their initial investment.

Diocesan policy requires parishes to buy systems versus leasing them. At least eight other parishes have made the switch. One of the latest, Corpus Christi Roman Catholic Church in Corona, installed 96 solar panels on its roof in March. A small committee made up of employees and parishioners tackled the project.

“There are people in the community that are already trained in these fields and wanted to volunteer their talents. Having those experts come in and share was great,” says Maria Bravo, Office Manager. “Parishioners are happy too that we’re actually saving money and using energy that the sun provides.”

However, the idea of going green is not always eagerly embraced at first. When St. Anthony Parish in Upland announced plans for a solar carport, the Business Manager says parishioners voiced concerns over the cost and feared that it would obstruct mountain views.

“In the beginning there was a little bit of skepticism as to would it generate enough power and would the savings be beneficial,” explains Analisa Castro, Business Manager. “Once it was up and the finished product was in place and now the savings that we’re seeing, which we share with our parishioners, I think the overall consensus is that it was a good idea.”

St. Catherine of Alexandria in Temecula is thinking long term with its “Go Green, Go Dream” campaign. The parish is raising funds for a solar paneled carport that, like the Diocese, includes charging stations for electric cars. However, the initiative is about more than money, it’s about a mindset. Parish leaders are asking all to consider their carbon footprint and what they’ll leave behind for future generations.

Bishop Barnes says he’s happy to see parishes are answering the call to care for our common home and be part of a larger movement towards clean energy. If parishes can’t afford solar panels, they can still be environmentally conscious.

“We tell all the parishes to try to be smart about how they consume energy,” says Meier. “There’s a lot of ways to do that. For instance, changing out windows and putting in thermal pane windows, new insulation and drought tolerant landscaping.”

Employees at the Pastoral Center say they are pleased with the upcoming changes. Caroline Beatty, who has solar panels at home and drives two electric cars, will soon save money on her commute.

“I’ll be able to plug in when I get here so then I’ll be able to drive all electric back and forth to work instead of having to use gas part of the commute,” says Beatty, Associate Director of Parish Assistance. “I’m super excited!”

The Solar Energy Project at the Pastoral Center should be completed in late September.