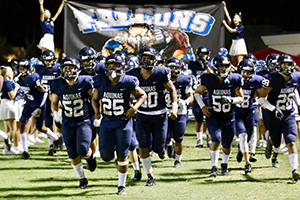 SAN BERNARDINO—The Aquinas High School football program continues to cement its status as a football powerhouse, after capping the season one victory away from a state championship.

The Falcons won the CIF Southern Section Division 5 Championship, their second in the last three seasons, with a 21-16 victory over Santa Fe Springs St. Paul on Nov. 29. Senior running back Terayon Sweet led them with 200 yards rushing and three touchdowns.
A week later, Aquinas defeated San Juan Hills High School 24-10 to claim the CIF SoCal Division II AA-Regional Championship. That earned them a chance to play for the state championship on Dec. 13 against Concord Clayton Valley Charter High School. In a hard fought, defensive battle Aquinas fell to Clayton Valley 10-7.
Aquinas Head Coach Jordan Brusig said he thinks the success of this season can propel the team to even greater heights in the future.
“I’m so proud of these guys and the way they battle every game until the end of the fourth quarter,” he told the Southern California News Group following the state championship loss. “We have a lot of young guys on this team, and this is only going to make them hungrier for next year.”