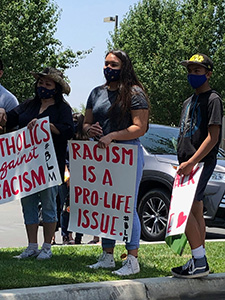 As he spoke of his decades long experience of racism, and the current national climate following the police killing of George Floyd, the voice of Deacon Don Norris, the only African American deacon in the Diocese, began to rise.

The Diocese, indeed, made a public denunciation of racism with a Peace Walk on June 20, a day after the annual Juneteenth observance that marks the day that slaves in Texas received the news of their liberation. More than 75 people took to the streets of San Bernardino, praying the Rosary and carrying signs as they walked from the Diocesan Pastoral Center down Highland Avenue to Perris Hill Park. The walk was organized by the Diocesan Ministry to Catholics of African Descent.

“I want to be visible and show my support that we as Catholics stand up against racism, that we stand up for those who are marginalized,” said Amy Christensen, who drove all the way from 29 Palms to participate in the Walk.

Many other local Catholic laypersons came to support the event. They were joined by five priests, three deacons and two religious sisters. Diocesan Seminarian Michael Ezeoke led the group in praying the Rosary. When they reached Perris Hill Park, Father Manny Cardoza gave an impassioned reflection. He offered that the tide of racism can only be turned if every person is willing to look at their own role in it – through their actions, inactions or cultural assumptions.

“We have to look at ourselves and be honest and say, ‘I was part of the problem,’ “ said Fr. Cardoza, who is the Pastor of Our Lady of Hope Parish in San Bernardino. “We have to ask ourselves, where is the racism in my own culture that I haven’t recognized and asked forgiveness for?”

Philomina Nwarueze, a parishioner of Sacred Heart Parish, Rancho Cucamonga, came to the United States from Africa 35 years ago. She spoke briefly at the Peace Walk. While not American born, she said she has come to recognize and experience the kind of racism that is perpetrated against African Americans.

“I’m actually one of them. We share the same blood,” Nwarueze said. “So, I decided to come out today and fight for my children and fight for my grandchildren. I want them to feel free in this land.”

Some signs and words of reflection at the Walk characterized the Catholic fight against racism as a Pro Life issue. Both Deacon Norris and Fr. Cardoza affirmed this idea, saying whenever the dignity of any human person is threatened, it becomes a “Life” issue for the Church.

“You can’t be a follower of Christ if you are going to pick and choose which of his teachings you like best,” Deacon Norris said.

Sam Kolendowicz, Director of Pro Life Ministries at Our Lady of Hope, who is European-American, joined the Peace Walk.

“I’m here to pray for an end to this [racism],” she said. “It pains me that I can count the number of white people here on one hand.”

Ezeoke, who is African, said he has been troubled that some of those who he has participated in Pro-Life marches and events with in the past have been silent on the issue of racism in recent weeks.