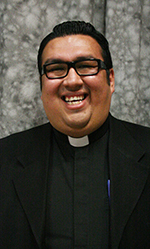 My brothers and sisters, this last weekend we commemorated the 4th of July, in which these words came, “We hold these truths to be self-evident, that all men are created equal, that they are endowed by their Creator with certain unalienable Rights, that among these are Life, Liberty and the pursuit of Happiness.”

Today we see a new generation of prophets, challenging the lived hypocrisy and demanding that we live out what was written in the Declaration of Independence, that “all men are created equal.”  Many have heeded their call, while others deny that a problem exists.  We see people of color, young people and citizens and non-citizens of all ethnicities rise up and demand action from the nation’s leaders; national, state and local.  We see this coalition of people walk together demanding a new way of policing, an end to practices, policies and a police culture that treats people of color, undocumented and documented immigrants, the poor and marginalized as enemy combatants to be suppressed and imprisoned; we see this coalition demanding a fundamental reform of police hiring, equipment being used, how to hold officers accountable and what kind of training they are receiving.

In addition, questions are being asked of how we commemorate and celebrate our nation’s history and how that history has impacted each group that lives in the United States.  No one is immune to this history and there have been those who have greatly benefited from decisions made, while there are others who have been terribly and negatively impacted by decisions made before they were born.  These are discussions that must happen and at times they will make us nervous, defensive, angry, sad and resistant to acknowledge that our Nation has fallen short throughout its history.  We must acknowledge that symbols and monuments that glorify the Confederacy and attempt to diminish the main reason for their founding must be eliminated from the public square and placed in museums, not to glorify, but to explain that the Confederacy was founded to uphold white supremacy and a repugnant and demonic belief that black people’s natural state is slavery.

While symbols and statues that glorify the Confederacy are a clear cut case, others are not so clear cut and we must acknowledge the complexity of history, of the human person and applying our modern standards to historical figures.  This is where conversations must happen, where we must look at history and base these decisions on who should be commemorated and honored, not on pure emotion, but on the contributions made by each individual in upholding the dignity of the human person or putting in place something that by its nature has benefited humanity.  Yes, there will be disagreements and we must acknowledge that there will be limitations as to who is making these decisions and for this reason an honest effort must be made to look at history and culture from multiple points of view, not simply from the dominant culture.  Furthermore, we must acknowledge that humans have a capacity for good and evil and these discussions will be complex because of this reality; yet if someone is glorified for upholding a fundamental evil, such as slavery, ethnic supremacy, eugenics, racism, or an outright denial of the dignity of the human person, then those individuals should not be glorified or held up as models, but should be unequivocally rejected.

As Christians, we must also recognize the historical role that the Church played in promoting a Eurocentric cultural world view, rather than a Gospel based world view, which respects cultures and whose ultimate goal is to guide every culture and people to the Good News of Jesus Christ.  There have been questions about particular individuals, even of those whom have been recognized as Saints by the Catholic Church.  For the Christian, it is imperative that we understand and acknowledge that even those who were recognized as Saints, were humans and were influenced by the culture of their time.  Saying that, there have been Saints, such as St. Junipero Serra, who upheld the dignity of the human person, even as those whom the Church was allied with sought to diminish this dignity and this must be recognized.  Within our own Catholic history, we recognize the sins, errors, limitations and failure of the Apostles of Jesus; they were products of their time and culture.  Yet, we recognize their successes; in bringing the Light of the Gospel to nations, to upholding the dignity of the poor, the abandoned, the widow, the orphan, the marginalized and the unborn.  To this day, we see the fruits of their labor each day, in how the Church is recognized as one of the greatest charitable organizations in the history of humanity, and how her members continually uphold the dignity of the human person in all its forms.

In the history of our Nation, this is one of most difficult periods ever to occur.  In the shadow of a global pandemic that has impacted all peoples, lack of leadership at many levels, hyper-partisanship and a strong distrust of institutions, like family, religion, government, experts and law enforcement, our nation and our Church, must answer these questions that are being raised about our history, our current lived reality, the lived hypocrisies that have led us to the fundamental question that is being asked by those who are “tired of being sick and tired”; when will we live out the revolutionary words written in the Declaration of Independence, “that all men are created equal?”