Bishop Francis Adesina returns to the Diocese he visited yearly as a priest from Nigeria. 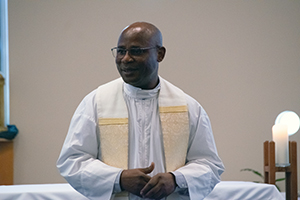 SAN BERNARDINO—Beginning in 1999 Father Francis Obafemi Adesina visited the Diocese of San Bernardino annually as a Nigerian priest to enrich his experience in parish ministry and, he says, to expand his cultural vision.

He returned to the Diocese again in October but under a much different pretense.

Bishop Adesina was ordained in April to lead the Diocese of Ijebu-Ode in his home country. Though he has had to hit the ground running in his new Episcopal Ministry, Bishop Adesina said he wanted to come back to San Bernardino and share his new journey with those here with whom he has forged connections.

“I felt it was important to come here and give thanks to all the friends I’ve made here that have been part of my journey,” he said.

Bishop Adesina, who also visited friends in the Diocese of Orange during his U.S. visit, arrived in the Diocese on Oct. 10. On Oct. 14 he celebrated the 30th anniversary of his ordination to the priesthood. Two days later he visited the Diocesan Pastoral Center where he concelebrated a noontime Mass with Bishop Gerald Barnes. At the conclusion he spoke about his years of visiting the Diocese and how it has fortified him as he confronts the challenges of being a bishop.

Later that day, Bishop Adesina attended a portion of the Building Intercultural Competencies for Ministers (BICM) training at the Pastoral Center and spoke briefly from his own experience about the value of learning a culture other than the one in which you were raised.

“It’s a great initiative that must be sustained,” Bishop Adesina said of BICM, “so that our Church can be reunited.”