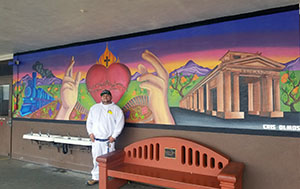 REDLANDS—Imagine jumping into a playpen full of colorful balls. That’s what artist Cris Olmos wants you to feel when gazing upon his new mural at Sacred Heart Academy in Redlands. On February 25th, the piece was officially unveiled and blessed by Father Erik Esparza, JCL.

A larger than life blazing heart of Jesus is the centerpiece of the 6 x 25 foot mural. It also features iconic city landmarks, orange groves, purple mountains and a last-minute addition.

“Jesus’s hands initially weren’t going to be placed there. I ended up putting them in because I think they serve as a very powerful statement,” says Cris. “To be honest, I felt a type of energy when I was painting them. It was a very spiritual moment.”

The students feel it too.

“The mural shows us we all have a part of Jesus with us whether we realize it or not,” says Sacred Heart eighth grader Bella Reeves.

Classmate Jaclyn Melendrez reveals, “When I look at the picture, I see God.”

“The mural really adds a facelift to our older buildings,” says Williams. “Sacred Heart Academy is the oldest school in the Diocese and we are proud to be a thriving school in our beautiful historic city.”

Cris paints commercially full-time, artistically in his free time. Until now, he has never combined his love of murals with his love of God. So the 26 year old took a little advice from mom.

“She was very excited that I was doing this and very proud. She told me, ‘make sure you pray and put it in God’s hands. He’ll help you out and guide you.’ ”

Standing before the wall, Cris, a parishioner at St. John the Evangelist in Jurupa Valley, says he prayed and the painting just flowed.

“Every single day I was painting that mural I felt like I was meant to be there. Being able to create is an extraordinary thing.”

While Cris went into the project with detailed drawings and notes, he didn’t want to map out every inch. He relished the challenge of “breaking away.”

“The artist that was sitting down with a pencil and paper is almost a different artist than the one standing in front of the wall with a brush and paint. For this particular mural I wanted to let myself go, be a little free. I’m dancing with the wall in a way,” Cris laughs.

Armed with lights and ladders, Cris spent six months coming to the school at night, painting into the wee hours. What could have been a long, lonely project turned into a brotherly bonding experience. Freddie signed Cris up; so Freddie often showed up.

“Being part of the mural with all its intricacies and deep meaning, not to mention the many late nights painting, eating and laughing together, brought my brother and I even closer.” explains Freddie.

His daughter, Isabella, an eighth grader at the school, was a frequent visitor, along with Cris’s girlfriend. All three painted oranges, grapes and leaves. Isabella gets the pleasure of walking by her contribution every day at school.

“It’s really cool you have in your mind, ‘yeah, I did that.’ You’re leaving your legacy on something that’s going to be there for a lot of years.”

And motivate a lot of students.

“It inspires me to move forward in my life.” says Sarah Buchanan.

Johnny Andrews chimes in, “It makes me want to pray.”

This is the second mural to adorn Sacred Heart Academy. The first, painted by Henry Figueroa, is next to the preschool and depicts Jesus surrounded by young children. More artwork at the school may be in the future, to which Cris says...

“The more the merrier!”