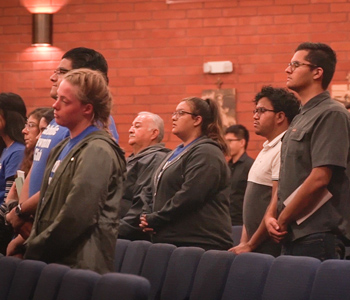 RIVERSIDE—College students and their families, along with staff and religious from three Inland Empire universities, gathered at St. Andrew’s Newman Center in Riverside on October 10 to kick off the 2019-2020 academic year.

The University of California, Riverside (UCR) Catholic Student Fellowship hosted the annual Academic Mass. The students planned the liturgy and served in various roles during the evening Mass. Students and staff from California State University, San Bernardino and the University of Redlands also joined in the celebration. Father Rafael Partida, E.V., was the principal celebrant with Father Cyriacus Ogu and Father Alwyn Anfone concelebrating.

During his homily, Fr. Partida reminded the young people of God’s love and purpose for them.

“Let the spirit of God accompany you in your academic year,” said Fr. Partida. “That your books do not become your gods. Your academic achievements do not become your idols. But become the tools through which God will enable you to shine beautifully in this world. That you may be a gift to others because God loves you and you love God.”

The community prayed for blessings and guidance upon the students and later gathered in the parish hall for dinner and fellowship after the Mass.

Students who attended the Academic Mass say that they rely on their faith and their relationships through organizations like Catholic Student Fellowship and Newman Club to guide them through the temptations of college life. The relationships have also helped them to grow in their spirituality and remain focused on a path to success in college.

Teresa Solis, 21, is a full-time fourth year Sociology student at UCR. She serves as one of the social and outreach chairs for Catholic Student Fellowship at the Newman Center and will graduate this year.

“I live in the dorms and there’s a lot of partying and drinking,” said Solis. “I haven’t done any of that because I spend most of my time here with people who share the same values. I’ve grown a lot in my faith because I found a community, a family here.”

Solis attends daily Mass at the Newman Center and adoration each week with her friends. After graduation, she plans to return to her home in Simi Valley to attend graduate school.

Elleana Ornelas, 21 and a full-time fourth year student majoring in Mathematics with an Application in Biology at UCR, also plans to graduate this year. She serves as president of Catholic Student Fellowship at the Newman Center and sings in the parish choir.

“Having people around me who are also still learning taught me how to grow more in my faith and gave me the foundation to my friendships,” said Ornelas. “They don’t encourage me to do anything bad or lead me to sin. They always lead me to a way that will help me become closer to God.”

Ornelas is also active with the UCR Newman Club, a Catholic ministry center found on university campuses around the world that was inspired by the writings of Cardinal John Henry Newman, who was canonized by Pope Francis on Oct. 13. The ministry offers liturgical services, bible studies, activities, retreats and fellowship to Catholic and non-Catholic students on campus.

She also plans to enter graduate school and then pursue a career in a sector in the medical field that utilizes her math background.

Angela Grummett, 20, is a full-time third year student majoring in English at California State University, San Bernardino. Her role as secretary of her college Newman Club allows her to engage with other students like her who also want to grow in their faith.

“I’ve been involved since freshman year and attending gatherings, helping with the Mass and attending daily Mass, as well as encouraging other students to join us, has helped me to stay grounded,” said Grummet. “Staying centered and having the good influences around me has been really helpful. I’ve learned a lot about discernment over the years and how it’s important to embrace who you are right now and seek God.”

With a full course load this year, Grummet hopes to graduate next summer and continue to grow in her journey as a young adult and person of faith.