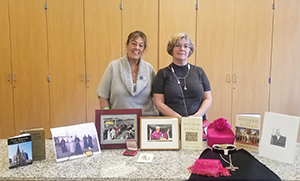 RIVERSIDE—St. Francis de Sales School got a surprise package from its most famous alum this year, care of the Archdiocese of San Francisco, on the Feast of Our Lady of Guadalupe.

The late Archbishop John Rafael Quinn left to the school he attended a series of books, photographs, commemorative items and vestments from his Episcopal Ministry. Archbishop Quinn was called to his eternal rest on June 22, 2017.
“Some of these items are very personal,” said St. Francis de Sales Principal Trenna Meins said. “To have these blessed possessions is quite an honor.”
The items were hand delivered by Rachel Alvelais, Priests’ Care Coordinator for the Archdiocese of San Francisco. Alvelais, whose daughters attend UC Riverside, told Meins that Archbishop Quinn has specifically left the items to the school in his will. It took one large box and one bag to hold Archbishop Quinn’s artifacts. They include:
• 1 Biretta (square-shaped hat)
• 1 Fascia (sash)
• Collare (Rabat and Collar)
• Pectoral Cross
• Amice (initial vestment covering regular clothes)
• Gremiale (square cloth placed on a bishop’s lap during anointing)
• 50th Anniversary Commemorative Medallion of St. John Paul II’s visit to San Francisco
• Photos (portrait, celebrating Mass on Gaudete Sunday, with tour group at Lourdes, with Pope John Paul II in San Francisco)
• Books (authored by him, and from his personal library)
• Funeral Mass Program
• Funeral prayer cards
Meins said the school plans to create a display case for the items and predicts they will be an inspirational document for students.
“It is very symbolic for us,” she said. “Archbishop Quinn was proud of being an alum of our school. Hopefully, this will help with vocations [to the priesthood].”
Archbishop Quinn was born in Riverside on March 28, 1929. After completing high school, he entered the seminary for the Diocese of San Diego and was eventually sent to Rome to complete his studies and received his degree from the Pontifical Gregorian University. He was ordained to the priesthood in Rome for San Diego on July 19, 1953. His first assignment as a priest was to serve at St. Francis de Sales Parish.