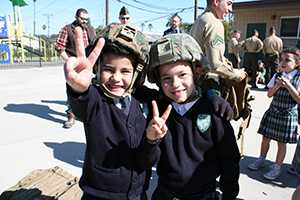 The Marines had arranged a visit to the school with Principal Tom Strickland to express their gratitude to the students, who had previously sent handwritten letters to the Marines while they had been deployed at the Southwest Border mission in recent months.
During the visit, the Marines showed off their gear and explained various military exercises they carried out while deployed. Students were able to interact with the Marines, try on field packs and even share “chow” with the Marines on the St. James campus.
“This is so important because it helps our children understand that freedom isn’t free,” said Mayor Vargas. “We have men and women on the front lines protecting our freedom and programs like this teach our young people to be grateful for their sacrifice.”
Vargas mentioned that these kinds of interactions between military members and students can have a lasting impact.
“These interactions also help the students remember that their care packages are going to real people and that helps build community.”
Strickland was inspired to invite the Marines after seeing how much a care package and a few thoughts from home meant to his own son, a medical corpsman, who had received such packages while deployed. Strickland’s father was also a Captain in the Navy, and with so much patriotism in his own family, it has been important for him to teach young people the value of appreciating our service members.
“A lot of times we only hear of the military in a negative context or a horrific event,” said Strickland. “But I wanted to impress upon these children about all the good things they are doing that many civilians never know about.”
In 2019, Strickland and the St. James students sent out more than 275 boxes to service members, which was a proud accomplishment considering the school holds an enrollment of 140 students, K-8th grade.
After receiving those packages while deployed on a ship, one of the officers came to Perris and visited the school and thanked the children. Seeing an officer in uniform made a huge impression on the children, who were excited to see a real-life hero return just to thank them in person.
Strickland began calling local military installations in an attempt to continue the program. He made contact with Barbara Greenbush at Camp Pendleton, who put him in touch with the Marines of the 3rd Battalion, 1st Marine Regiment. “We couldn’t have done this without Barbara,” he said.
The St. James students made the cards and care packages, and Strickland took the 43-mile trip down to Camp Pendleton to hand deliver them. He said the Marines and Greenbush were grateful and asked if there was something they could do in return. Strickland asked if Greenbush could coordinate to send out some Marines to pay a visit to St. James.
Marine Corporal Christopher Woods of the 3rd Battalion, 1st Marine Regiment was happy to visit the school to say thank you to the students.
“Most care packages we receive overseas can be from so many months back and you never meet the person sending them,” said Woods, a native of Chandler, Arizona. “We are always grateful for those, but these packages and cards from the St. James students were special.”
This was the first visit by the Marines, who are slated to deploy over the summer. Strickland says the students will continue to send packages to their new heroes during the fall. Woods and the other Marines of the 3rd Battalion, 1st  Marine Regiment said these were some of the first care packages they received where they were able to actually meet the student who had sent it,  which made it more personal.
Said Woods, “I have a daughter, so to get a handwritten note from a kid touches my heart, brings me back to home and takes you away from the seriousness of what we do, just for a little bit.
“I have kids here today that wrote me a letter three months ago when we were on the Southwest Border mission. I get to meet them today and say, ‘Hey, I know you like volleyball. How is that going?’ ”
The Marines will certainly have some rough days ahead. But for at least one day, they can share a few smiles with some kids who think the world of them.