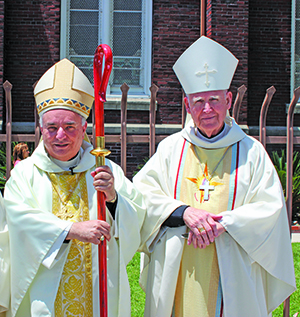 As the Diocese of San Bernardino celebrates the 25th Anniversary of Bishop Gerald Barnes’ episcopal ordination, some have asked “who was the Bishop before Bishop Barnes?”

The answer is Bishop Phillip Straling, who was the first Bishop of our Diocese, from 1978-1995. The more challenging question is, “who was the Bishop before Bishop Straling?” This column will explore the episcopal leadership of the Catholic Church in the Inland Empire, leading up to Bishop Barnes.

In 1493, the Papal Line of Demarcation gave Spain the sovereignty over the Americas. Thus, the Cardinal of Seville, Spain had church jurisdiction over what is today San Bernardino and Riverside counties. After Spain took over Mexico in the early 1520’s, the Spanish practice of establishing a diocese in newly acquired territory was quickly evidenced in the new colony.

In 1620, the Diocese of Durango was formed and had jurisdiction to the lands north and northwest of Mexico City. The first prelate was Bishop Gonzalo de Hermosilla (1621-31). This responsibility would endure for a century and a half. Over the next hundred years, the Bishops of Durango visited their northern missions performing numerous confirmations.

When Spain expressed concern over the interest of other countries in the new land of Alta and Baja California, it began to send expeditions north from Mexico to develop its own presence (California was part of Alta California). As part of the exploration, Rev. Junipero Serra would build the first mission in San Diego in 1769, leading to 21 missions as far north as San Francisco by 1823. In 1779, the Diocese of Sonora was formed, led by Bishop Antonio de los Reyes (1783-87) who had jurisdiction over the northern areas that included the Californias.

After the secularization of the California missions was begun, the Mexican Congress in 1836 petitioned Pope Gregory XVI to erect a diocese for Alta and Baja California. Unfortunately, international problems in Europe and North America caused a delay. In 1840, the Diocese of both Californias (Alta and Baja) was formed with Rev. Garcia Diego as its first Bishop. The Diocesan See was located initially in San Diego and later moved to Santa Barbara.

After the Mexican War of 1846, the name of the Diocese was changed to Monterey in 1849. When California became an American state with its admission to the Union in 1850, it became necessary to change ecclesiastical jurisdictional lines so as not to have a Diocese cross an international boundary.

With the Gold Rush and international commerce, northern California experienced tremendous growth in the early years of the new state. This resulted in the formation of the Diocese of Grass Valley in 1868 from the Archdiocese of San Francisco. This Diocese would be renamed the Diocese of Sacramento in 1886.

Following Bishop Amat (1854-78), the following episcopal leaders governed the Diocese of Monterey-Los Angeles: Bishop Francis Mora (1878-96); Bishop George Montgomery (1896-1903); Bishop Thomas James Conaty (1903-15); and Bishop John Joseph Cantwell (1915-1922). During this time when the Inland Empire was part of the Diocese of Monterey-Los Angeles, 24 parishes and nine schools were built in our local area.

In 1936, another division took place. The Diocese of San Diego was started and Los Angeles became an archdiocese. The first Bishop of the Diocese of San Diego was Rev. Charles Buddy (1936-66), followed by Bishop Francis James Furey (1966-69) and Bishop Leo Thomas Maher (1969-1978). During that 42 year span, 52 churches and 31 schools were built by the San Diego bishops in our local area.

In 1995, Bishop Straling left to become the Bishop of Reno. On March 12, 1996, Bishop Barnes was installed as the second Ordinary for the Diocese of San Bernardino.

Beginning with Spain’s sovereignty in 1493, there have been 29 episcopal leaders with ecclesial responsibility for our local area. Of those 29, there have been 11 Bishops since 1850 when the Diocese of Monterey began. As the Diocese celebrates the 25th Episcopal Anniversary of Bishop Barnes, we remember the previous ten Bishops who provided spiritual and administrative leadership for the people of the two counties of San Bernardino and Riverside for a period of 145 years since the state of California began.

(The writer is appreciative to the first Archivist of the Diocese, Dr. Bruce Harley, for his diligent research on the history of the Catholic Church in California.)