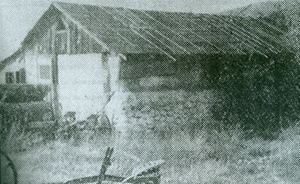 From Redlands Boulevard near the Loma Linda and Redlands city border up to the Beaumont area sits a quiet canyon named San Timoteo. It was once a natural trail for Native Americans, as well as the early Franciscan missionaries heading to the coastal Missions.

Pioneer families began settling in the canyon during the 1850’s. The families included the Pines, Frinks, Haskells, Singletons, and Coxes. The first school in the canyon was opened in 1856. There was a stage stop nearby that operated from 1862–1876.

While the Protestant community met at the school on Sundays, the Catholic families met in their homes. When Rev. Pedro Verdaquer (1863-1867) became the pastor at San Salvador de Jurupa Parish in Aqua Mansa (today’s south Colton), he came to San Timoteo to celebrate Mass as often as possible.

In 1875, the Southern Pacific Railroad extended into the canyon and ended the stagecoach era. The railroad brought an influx of workers which added to the ranch-hands population.

Rev. P.J. Stockman became pastor at St. Bernardine Church in San Bernardino in 1874. It was his vision to build a chapel in San Timoteo Canyon to serve the increased number of Catholics. With the help of local families, a one-room adobe structure was built in 1875 near the junction of San Timoteo Canyon Road and Live Oak Canyon Road.

The growth in the canyon population during the 1870’s is evident from the sacramental records at St. Bernardine Parish in San Bernardino. Bishop Thaddeus Amat from the Diocese of Los Angeles confirmed five young people in 1868 and 11 young people in 1871. By contrast, his successor Bishop Francis Mora confirmed 18 persons in 1876 when he came to dedicate the new chapel. Then in 1878, Bishop Mora confirmed 20 people.

The little canyon church eventually outgrew its usefulness. By the late 1880’s, economic changes sent many Catholic settlers to Redlands, Yucaipa or Beaumont. Thus, it became necessary to hold church services closer to where most of the people lived. The new Sacred Heart Parish in Redlands celebrated its first Mass on April 1, 1894.

As the years passed, the chapel’s adobe structure deteriorated so that a century later only a few chunks of adobe remained under the outstretched branches of a huge pepper tree that was planted in the 1870’s to provide shade for the chapel.

Credit is given to Dr. Bruce Harley, the first Diocesan Archivist, for his research on San Timoteo Canyon.