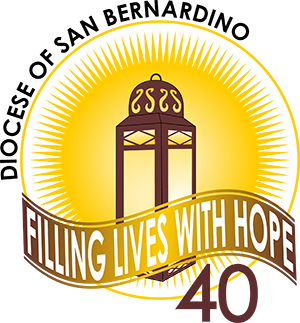 (Note, some of the names of diocesan structures at the beginning of the Diocese are different than the names they have in 2018)

I was reading a newspaper article recently where a retail company was opening a new store. The development of the new addition was the responsibility of a special division whose task was to build the new store.

In the Catholic Church, there is no special division in Rome that will begin a new Diocese. The Church names a new Bishop who will start the new Diocese in collaboration with the priests, religious and laity of that local area.

So it was in 1978 with Bishop Phillip Straling, who invited many people to join him in creating the new Diocese of San Bernardino. There had been regional diocesan offices in San Bernardino since 1970. Bishop Straling would keep those offices and add a new Pastoral Center at 1450 “D” Street in San Bernardino.

As Executive Director for the Diocesan Synod in San Diego from 1972-1976, Bishop Straling had the opportunity to work with many local leaders during the listening sessions. That familiarity would be helpful as he looked for talented people to serve in his administration. One such appointment was Rev. Peter Luque as the Episcopal Vicar for Hispanic Ministry.

Sister Charlotte Ell was selected as Superintendent of Schools. Rev. John Pomis became the Rector of the Cathedral (Holy Rosary Parish). Rev. Robert Miller was the Director of the Center for Christian Ministry, and Rev. Gerry Butler was appointed as the representative to Catholic Charities.

Bishop Straling announced his selection of the Episcopal Vicars for the five Deaneries: Rev. Edward Cronin for the San Bernardino Deanery; Rev. Peter Covas for the Riverside Deanery; Rev. Donald Webber for the Ontario Deanery; Monsignor Michael Nolan for the Palm Springs Deanery; and Rev. William Hart for the Victorville Deanery.

These appointments by Bishop Straling were announced in a press release four days after his Episcopal ordination on November 10, 1978.