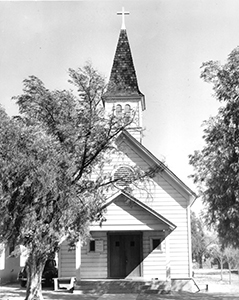 In 1893, when Riverside County was formed, a small chapel was built on Perris Boulevard, four miles north of Perris, to serve the residents of the Perris Indian School. This school was the forerunner of the Riverside Sherman Institute.

Rev. P.J. Stockman, the pastor of St. Bernardine Church in San Bernardino, would travel to Perris for religious services and classes.

The school closed in 1902 and the chapel closed soon after.

Over the next years, Rev. P.A. Quinn from Our Lady of the Lake Church in Lake Elsinore reported the town of Perris was growing and called for the building of a Catholic church.

The new church building was dedicated on May 10, 1910 by Bishop Thomas Conaty from the Diocese of Monterrey-Los Angeles. The building was formerly a Protestant church and was given as gift from Mr. and Mrs. James McCahill of Duluth, Minnesota.

St. James was a mission of St. Anthony Church in San Jacinto and Our Lady of the Lake Church in Lake Elsinore from 1910-1941.

The second church was built in 1957 and an elementary school, served by the Sisters of Mercy, was added in 1965.

Eighteen resident pastors have served St. James since 1941. The longest pastor was Rev. Corneluis Waldo from 1952-1963.

Today, St. James the Less is one of the largest parishes in the Diocese.

Our Lady of Soledad Parish 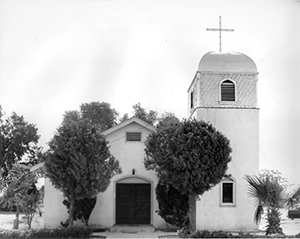 The second Catholic Church in the Coachella Valley was begun in 1923 with the initial church building located on First Street in Coachella.

The small church with seven pews was dedicated to Mary on December 24, 1924.

In the beginning, it was a mission to Precious Blood Parish in Banning and served by the Franciscan Missionaries.

The Diocese of Los Angeles-San Diego elevated Our Lady of Soledad to a full parish in 1927.

The Missionary Sisters of Our Lady of Victory Noll came to Coachella in 1934 to provide religious education for the parents and youth.

As the Coachella Valley developed after World War II, the parish experienced significant growth. By the 1960’s, there were 1,700 young people receiving religious instruction in the catechetical centers located in Coachella, Thermal, Mecca and Oasis.

The parish sought to build a new and larger church.

The first Mass was celebrated in the new Church on the feast of Our Lady of Guadalupe on December 12, 1971. This second church was located on Oasis Palm Avenue, cross of Avenue 52.

The parish would later open mission churches in Thermal, 100 Palms and Mecca.

Our Lady of Soledad would also become home to the Valley Missionary Program; a ministry of evangelization, renewal and small faith communities for the Hispanic community.

Twenty-six pastors have served the parish during these nine decades, including the religious communities of the Holy Cross Congregation and the Missionary Servants of the Most Holy Trinity.

The parish continues to be one of the largest parishes in the Diocese.

As these two parish communities celebrate their new churches, may they remember the rich history of faith and service shown by the previous generations of their parishes.