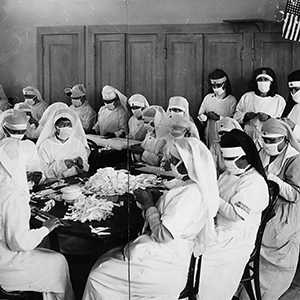 As we continue to be challenged by COVID-19 in 2020, we remember that our forebearers found themselves in a similar situation in 1918. The United States had just entered World War I the year before.

The first stage of the Spanish flu began in April 1918, when the first mention of the flu in the United States, is found in a public health report with 18 reported cases and three deaths in Haskell, Kansas. As the United States was sending trained soldiers to Europe, the second stage of the flu emerged at Camp Devens near Boston, Massachusetts in September 1918. There would be 14,000 flu cases and 757 deaths at the camp.

By October 1918, 195,000 Americans were killed in the United States by the flu. One problem was the lack of nurses to care for the sick due to the war effort. States and cities had closed schools, theaters, churches and all public gatherings.

Locally in the Inland Empire, the flu arrived in October 1918. Cities were quick to respond by banning all public events, schools, civic meetings, and church services in San Bernardino, Riverside and Redlands. The city of Ontario ordered that no funerals could be held for fear of spreading the flu. During the weekend of October 26-27, the courthouse in San Bernardino was sealed and fumigation was conducted for all the offices.

In Riverside County, 85 new cases of the flu were found in Coachella Valley on October 18, but there was only one doctor to care for the patients. The next day, Dr. W.B. Wells from the county health board sought an emergency building to be used as an alternative hospital.

He also admonished people who had recovered and were returning to work and school too quickly. The chances of getting pneumonia were high.

On October 23, the Riverside County Board of Supervisors enabled the Chairperson to “act for the Board in any emergency which may arise from the flu epidemic.” Later, the Board would also authorize the Chairperson to spend any monies necessary for the flu. By the spring of 1919, Riverside County had weathered the epidemic. Dr. Wells reported 3,661 cases of the flu and 57 deaths in the county.

Historians believe the fatal severity of the second stage in the fall of 1918 was caused by a mutated virus spread by the wartime troops. More United States soldiers died from the flu than were killed in the World War I.

The third stage of the flu occurred during the winter and spring of 1919. In San Francisco, there were 1,800 flu cases and 101 deaths during the first five days in January. By February 1919, the flu began to dissipate.

The Spanish flu will always be known as a deadly virus. Over 500 million people worldwide were infected; representing 1/3 of the world’s population. The death count was 50 million worldwide, with 675,000 deaths in the United States. The high mortality in healthy people was a unique feature of this pandemic. We need to remember that in 1918 there were no vaccines or antibiotics available to the medical community. The first vaccines would come during the 1940’s.

For the Catholic Church in San Bernardino and Riverside counties, these were very challenging times. As part of the Diocese of Monterey – Los Angeles, the Catholic presence was small, with only 17 parishes and 5 schools in the two counties. In addition to World War I and the Spanish flu, there was a significant influx of Mexican Catholics who were fleeing the Mexican Revolution. The new Mexican constitution of 1917 was strongly anti-Catholic. The Catholic presence would experience tremendous growth during the 1920’s, with the opening of 15 new parishes in our two counties.

Over 2000 years, the Catholic Church has encountered numerous natural disasters. The faithfulness of the Catholic people with God’s loving care and compassion will carry the Church through COVID-19.