The Mass has been said, the parishioners have gone home, and the Roman collar comes off. Now what does a priest do? We take a look in our ongoing series “Holy Hobbies.” Learn about the hidden talents and trades of our Diocesan fathers. Could one of them be yours? Find out as we meet a shepherd that’s a shutterbug. 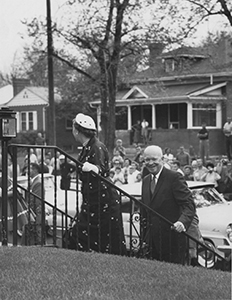 If the President-Elect visits our Diocese, expect Father Vincent Connor to be there. Like many others he’ll have his camera propped up and poised. But not for a selfie, something far more serious...his vast collection of Presidential photographs.

“Given the chance to get a President, absolutely! What greater challenge is there?” exclaims the now retired Fr. Connor.

That challenge can turn this man of the cloth into a bit of a daredevil. Through the years, he’s crept through crossbeams to get on stage with Robert Kennedy, hung over a car windshield for President John F. Kennedy and hid behind a bush to snap President Dwight Eisenhower. That sneaky maneuver drew the attention of the Secret Service.

“The agent said, ‘When the President is around, you should never make fast moves. We didn’t tackle you because you’re a 14-year-old kid,’ ” recalls Fr. Connor with a smile.

The clergyman admits he’s a different person with Nikon in hand.

“I don’t know if it’s a love for me or an obsession. It’s something I have to do.”

That was apparent even as a youngster in Colorado.

“I used to sneak my sister’s camera and take pictures of the dog. I finally got my own camera at age 10.”

By the time he was in high school, Connor got a job with a professional photographer. He started in the darkroom and worked his way up.

“I shot my first wedding when I was 15. My boss had to take me there because I didn’t drive yet. That’s where I really started.”

Another passion was burning in the young Connor as well -  a desire to be a priest. So after high school, he entered the seminary. His first semester; a real struggle. The result; failing grades. So Connor left the seminary and pursued a career in photography, eventually landing a job with Disney. While it was a glamourous gig that included photographing celebrities, Connor wasn’t satisfied.

“I just felt that gnaw, that there was something that I needed to do.”

Using photography to pay his way, Connor attended Carroll College in Montana, then moved on to Conception Seminary College in Missouri. The second time around was a success and Connor was ordained to the priesthood. He spent much of his priesthood working in California prisons, including 19 years at the youth correctional facility in Chino. He provided worship services, counseling and, of course, photography. Fr. Connor still has books full of prison photos.

“They (prisoners) loved it,” he says. “For me, I wanted to capture life there, convey what was in my head, try to share something.”

And share something he did…with President Barack Obama. In 2014, Father Connor had the opportunity to talk with him about prison ministry. Father Connor says the President was interested in reform.

“And I’d say within a year, he (President Obama) went to the prison and met with prisoners. I’d like to think I had something to do with that…but you know,”…he laughs.

When not photographing Presidents, Father Connor seeks out Popes. His photo credits include Pope Francis, Pope Benedict XVI, and Pope John Paul II. Getting the latter, posed a personal dilemma.

“[Pope John Paul II] came around in the Pope Mobile. I was in perfect position. Then he got out and started walking right towards me and I had to think, ‘Do I take his picture or kiss his ring?’ I took the picture.”

Which is why he says…

Yet the two are intertwined. Fr. Connor taps into his creativity for both photography and worship. The priest, who now performs funerals at Saint Mary Magdalene Parish in Corona, says liturgy should have some flow, some flair.

“Liturgy is art,” he says. “You should be able to add some drama. I cringe when I hear a dry scripture reading. Yes, it’s a sacred ritual but it’s an art form.”

And photography is the art form he can’t live without.

“There’s a certain high, a certain satisfaction. You get the right shot, it doesn’t matter if anyone else likes it or not. Photography is in my DNA.”