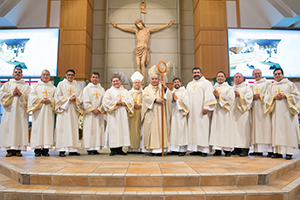 CHINO HILLS—Every pew of St. Paul the Apostle Church in Chino Hills was filled on August 25 with people wishing to join Bishop Gerald Barnes in celebrating the Ordination of 11 men to the Permanent Diaconate.

Lugo expressed some of the emotions he felt while waiting for Mass to begin.

“There’s a little anticipation, a little nervousness for sure, but we’re looking forward to the next step, to the next part of our journey, the part of service that we are called to do,” he said.

The three-hour Mass opened with a 15-minute procession that included over 90 deacons and their wives, as well as the 11 men to be ordained, 40 priests from around the Diocese, Religious Sisters, Knights of Columbus and members of various diocesan organizations.

Bishop Barnes described in his homily the kind of leaders the people need in this particular time in the Church’s history, alluding to the sexual abuse crisis that has returned to the public spotlight.

“It’s a time that has many challenges and a time which our church faces a tremendous crisis, but it’s the time you’re being called... You are being called to identify yourselves more than ever before with the Christ who came to serve and not to be served,” he said. “This is a beautiful day, it is a great day. We cannot lose hope, because God is calling 11 more. And he’s calling in this time because they are needed more than ever to rebuild the Church. To be truthful and authentic witnesses of the Gospel.”

The wives of the new deacons helped in preparing for the celebration and served as lectors, offertory gift bearers and one as the responsorial cantor. At the end of the Mass, Bishop Barnes acknowledged the women for their faithful support of their husbands’ journey to becoming deacons.

The ordination of the 11 men brings the number of deacons in the Diocese to a grand total of 126.

“This is a totally different feeling and I can’t compare it to anything else from the rest of my life. It’s a big blessing,” said Jaime Rosas.

As clergy, deacons’ duties include proclaiming the Gospel, giving homilies at Mass, administering some Sacraments (baptisms, weddings), and performing acts of charity.

Bishop Barnes announced that the new deacons would begin their new assignments in October. He added that there would also be changes in assignments for current deacons due to the increase in ordinations over the last couple of years. Final assignments will be announced in the next month.

“The diaconate community received new members today and it looks pretty good the next few years. There’s only going to be longer celebrations,” joked Bishop Barnes. “And that’s a good sign, a very good sign.”