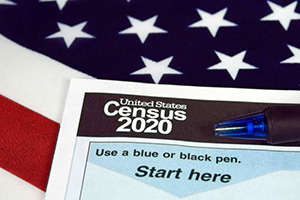 Bishop Gerald Barnes in a letter is encouraging parish communities of the Diocese to facilitate participation in the 2020 Census.

Taking part in the federal government’s decennial population count is important in the just allocation of resources that improve quality of life, the Bishop points out in his letter.
“This count…has important consequences,” he writes. “Congressional districts are apportioned and funds for projects like schools, roads and social services are determined based on this count.”
Historically, the Diocese has worked directly with the U.S. Census Bureau to promote participation. No such direct partnership is in place this time, however, and Bishop Barnes expressed concern last year when the administration of President Donald Trump proposed adding a question to the Census document regarding the citizenship of the respondent. The Bishop instructed parishes not to participate in promoting the Census until it was determined that the citizenship question would not be included.
“We know that sometimes there is fear and distrust around the Census,” Bishop Barnes states in his letter. “We are pleased to note that the citizenship question has been permanently blocked by the Supreme Court and will not be part of any Census questionnaire.”
The Diocesan Office of Advocacy is working with Inland Congregations United for Change (ICUC), a Catholic-rooted community organizing group that works with many parishes in the Diocese, to raise awareness at the parish level of the need to participate in the Census. ICUC began its Census work in the parishes of the Diocese during the holiday season but will ramp up its efforts in the first quarter of 2020, ahead of Census input day in April.
ICUC is training parish volunteers to distribute and collect commitment cards from parishioners. Stationary Census Centers will be set up in parishes such as Our Lady of Soledad, Coachella and The Sanctuary of Our Lady of Guadalupe in Mecca where parishioners can get information about the Census and eventually provide their information for the Census. A Mobile Census Center will also be used to provide the same services to parishes in the Diocese upon request.
Much of ICUC’s Census work is occurring in the Low Desert, San Bernardino and Riverside vicariates of the Diocese, says Tom Dolan, Executive Director of ICUC, but any parish in the Diocese that would like to collaborate with the organization to boost participation in the Census can do so.
“We can help wherever people feel they need assistance,” says Dolan. “We’re hoping that more than 200,000 people will get the basic message about the Census and be encouraged to participate.”
Parishes interested in working with ICUC on Census outreach can contact Christina Ruiz at (909) 383-1134.