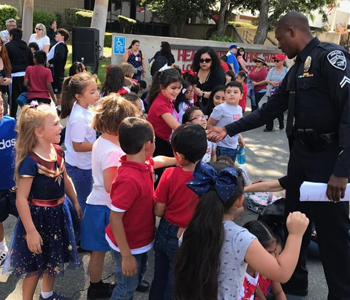 Imagine a field trip in which students, teachers, and parent chaperones don’t board a bus. They walk. Now imagine an entire school doing so. Every year with the approach of another 9/11 anniversary, Americans take time to reflect upon the events of that tragic day, many attending commemorative ceremonies or prayer services across the nation.

“This was a unique teaching opportunity,” she said. “Hearing a speaker will mean more to our students than watching a documentary. It’s amazing to think that 18 years have passed since 9/11, so not one student from K-12 was born yet.”

The ceremony took place on N. Willow Street, situated between the police and fire departments. Rialto Mayor Deborah Robertson and other local dignitaries were present. Delivering the invocation, a police chaplain called upon God to bless our nation in its time of mourning, as a giant American flag, suspended from a fire ladder gently fluttered overhead. Keynote speaker Kathy Thompson, a retired police lieutenant, hailed the courageous effort of first responders on 9/11.

“Hero is a very small word,” she stated, “but it is huge in meaning.”

She described the efforts of ordinary citizens —some of whom perished — who selflessly guided others to safety through the smoke and flames. “We carry that same responsibility,” she said, “to preserve and protect our liberties and freedom.”

As if to underscore her words, Engine 205 and a paramedic unit, lights flashing, went out on a call.

Thompson described the heroic efforts of 9/11 hero Welles Crowther, who is credited with guiding as many as 18 victims to safety on that day. Having heard several firsthand accounts of bravery, the students were saddened, but inspired.

“The events of 9/11 are heartbreaking.” said seventh grader Amanda Preciado, “I will be praying for those families today, and I am proud to think that ordinary citizens are heroes, too.”