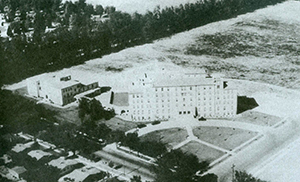 St. Catherine Convent School, established in 1880, had the orphanage component moved to Los Angeles and the convent school portion moved to Colton. When the original building was torn down, key leaders in the city were interested in the prime location at 5th Street

A group of local businessmen suggested a Catholic hospital be built at that location. Church officials from the Diocese of Los Angeles (today’s Diocese was part of Los Angeles at that time) considered the proposal but decided against it due to the lack of space for expansion. A second group of interested persons, led by Dr. Philip Savage, was concerned by the lack of adequate hospital facilities in San Bernardino. Dr. Savage, while doing advance surgical studies at the Mayo Clinic in Rochester, Minnesota, learned about the capable service provided by St. Mary Hospital in Rochester, operated by the Franciscan Religious Community.

Though a Protestant by religion, Dr. Savage saw no reason why San Bernardino could not provide a first-class hospital operated by a dedicated Catholic religious community to meet the medical needs of the community. Dr. Savage met with Rev. Patrick Dunne, pastor of St. Bernardine parish from 1927 – 1939, who expressed his willingness to investigate the possibilities.

The Franciscan Community from Rochester was not available, but the Sisters of Charity of the Incarnate Word from Houston Texas expressed their interest. This community already had one hospital in California located at Long Beach and were willing to consider a second hospital in the state. On May 26, 1929, Fr. Dunne made his request in person to Mother M. Placidus Mulcahy, CCVI, in Houston and was successful in his presentation.

Mr. R.L. Mack, President of the Pioneer Title Insurance and Trust Company, who also was President of the San Bernardino Chamber of Commerce, brought the two interested groups together and formed the Citizens Hospital Committee of the San Bernardino Chamber of Commerce. On December 4, 1929, a formal trust agreement was established where the unified group agreed to purchase a suitable site, hire a building designer and begin a fund raising campaign.

Fr. Dunne traveled a second time to Houston to meet with Mother Placidus. His request for a nursing order was strongly endorsed by Bishop John Cantwell of the Diocese of Los Angeles as well as by the physicians of San Bernardino and the Chamber of Commerce. Some of the financial agreements included: a site would be furnished, the hospital committee would raise $80,000, and the Sisters of Charity of the Incarnate Word would advance $550,000 for needed construction money. Even though the Great Depression was beginning, the united effort by the citizenry to build the hospital was successful.

Four sites for the new hospital were donated and evaluated. In the end, a 17 acre site at the intersection of Highland Avenue and Waterman Avenue was chosen by the religious community, the Chamber of Commerce and the Hospital Committee. One report stated that the selected site was “ideally located far from the noise and traffic of the city, nestling at the foot of the San Bernardino Mountains.”

The groundbreaking ceremony took place on August 15, 1930 led by Bishop Cantwell. Construction began first on a convent and chapel for the Sisters who would be working at the hospital. On May 26, 1931, Bishop Cantwell returned to San Bernardino to dedicate the new convent and chapel. Two weeks later, the Sisters hosted a reception at the convent with 600 people in attendance.

The 125 bed hospital was officially dedicated on October 10, 1931 by Governor James Rolph who gave the keynote address. Governor Rolph stated: “These noble women have dedicated their lives to the relief and cure of the sick and the maimed. San Bernardino can be proud of this great hospital.” The new hospital opened its doors and began receiving patients on October 26, 1931.

By the time of the 25th Anniversary in 1956, it had become evident that additional beds were needed to serve the steadily growing community after World War II. Bishop Charles Buddy of the Diocese of San Diego dedicated the new South Wing on July 3, 1960. Further expansion occurred in 1970, when the six story nursing tower was built and the capacity of the hospital was raised to 254 beds.

By the end of the 1970s, the hospital was serving 18,000 patients a year, with 1,200 employees and 250 doctors. St. Bernardine celebrated its 50th Anniversary in 1981 culminating with a “Golden Reflection Grand Ball” at the National Orange Show in San Bernardino on October 12 of that year.

On October 12, 1991, St. Bernardine recognized its 60th Anniversary by dedicating the new six floor North Tower, opening a medical oncology unit and a new medical surgical unit. As part of the 75th Anniversary in 2006, the hospital embarked on a major critical needs program to modernize and expand the facilities throughout the Medical Center. Included in this project was the renovation of the 1931 convent for the religious community.

In 2013, Bishop Gerald Barnes recognized the important contribution by the Sisters of Charity of the Incarnate Word to health care in San Bernardino and Riverside Counties by awarding the Sisters the Amar Es Entrgarse Award at the annual Bishop’s Dinner.

Congratulations to St. Bernardine Medical Center on its 85th Anniversary!

Dr. Bruce Harley in his “Readings in Diocesan Heritage” Vol. 9 provided the background research for this column.