The co-ed high school began in 1920 with the sisters from the Immaculate Heart of Mary religious community as faculty. San Bernardino and Riverside counties were part of the Diocese of Monterey-Los Angeles at that time.

The economic depression during the 1930’s was difficult for the school, but the prosperity after World War II would lead to an expansion of the school with eight classrooms, a girls locker and shower facility, and a library. When Newman High School opened in Fontana in 1947 as an all-boys school, there was an impact on the number of male students at St. Bernardine High School.

In 1954, Bishop Charles Buddy from the Diocese of San Diego, which had absorbed San Bernardino and Riverside counties 18 years earlier, announced that a new central high school for boys would open in the city of San Bernardino for the next scholastic year.

Aquinas Hall, the first name for the school, opened with 49 freshman boys. One of the early challenges for the new school was student transportation. To purchase a school bus, the tuition was raised to $25 a month. However, having three Catholic high schools in close geographical proximity caused financial challenges for all three schools during the 1950’s.

There were only 234 boys at Aquinas High School in 1965. This led to merger discussions with St. Bernardine High School. In 1967, the first St. Bernardine – Aquinas graduation was held. To prepare for the eventual merger, 15 acres of land was purchased just north of the Aquinas campus in 1969. This provided for the needed expansion with eight classrooms, a library and gymnasium, science laboratories and even a swimming pool. 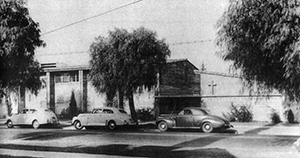 With the first graduation of the new elementary school at St. Francis de Sales Parish in 1921, there were enough students from St. Francis de Sales and Catholic graduates from the Riverside public schools that a high school freshman class could be formed. In September 1921, a fifth Dominican sister from Texas arrived to join the Dominican community teaching in the elementary school. Sister Mary John Lamb would teach all the first-year classes at the new high school.

The high school along with the elementary school was located on the property of St. Francis de Sales Parish in downtown Riverside. The first graduating class consisted of four girls. One of the two graduates in 1928 was George Rice, who would later become a priest in the Diocese of San Diego. The high school received its state accreditation in 1933.

Much of the success of the high school can be traced to the leadership and determination of Msgr. Peter Lynch who served as pastor for 40 years (1934-1974). His continuous support led to the construction of a new convent in 1939 and later, in 1947, six new classrooms, an auditorium, new school office and a library.

Immediately after World War II, Bishop Charles Buddy purchased property at the intersection of Arlington and Brockton Avenues in Riverside. In 1946, St. Catherine of Alexandria Parish was begun. After the establishment of the parish elementary school in 1954, a large “faculty house” was built adjacent to the Church to accommodate the Holy Ghost Fathers who would serve at both the parish and new high school.

Bishop Buddy approved the new high school and Notre Dame opened in 1956 with 59 boys in the freshman class. Separate high schools for boys and girls in the Diocese of San Diego was an important value for Bishop Buddy. In the early 1970’s, two events occurred that would impact St. Francis de Sales High School. First, there was a declining number of Dominican Sisters available to teach at the high school, and secondly, Notre Dame High School was experiencing financial difficulties. The solution to these developments was to combine the two schools.

On the golden anniversary of St. Francis de Sales High School in 1972, the final graduation was held for 65 girls. When the two schools merged that fall, the total enrollment was over 600 students. The Dominican Sisters joined the faculty at Norte Dame. At St. Francis de Sales Parish, the elementary school expanded into the vacated high school facilities. To accommodate the new students, Notre Dame added eight new classrooms, two laboratories, and a home economics room.

In closing, the leadership and dedication demonstrated by Bishops, pastors and school officials contributed to this unique reality with these two sets of Catholic high schools. The memory and spirit of St. Francis de Sales High School lives on today at Notre Dame High School, and the tradition of St. Bernardine High School is part of the culture today at Aquinas High School.