Each month the BYTE will publish sections of the U.S. Bishops Pastoral Letter “Encountering Christ in Harmony: A Pastoral Response to Our Asian and Pacific Island Brothers and Sisters. 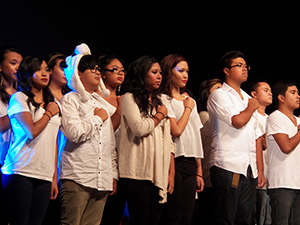 Family is an integral part of every Asian and Pacific Island community. For many, the cultural value of acknowledging generations past and present parallels an understanding of the Church’s tradition.

The beginning of the Gospel of Matthew, for example, lists the many generations that preceded Jesus, stretching back to Abraham and Sarah and continuing through a complex list of colorful characters. Asian and Pacific family structures are foundations for reflections on and discussions about generational concerns.

Most often, the first generation (i.e., those who arrive in the United States as adolescents or adults) embraces filial piety as a key cultural variable for the functioning of the family. Filial piety means respecting and giving due obedience to one’s parents while they are living and providing a proper funeral and remembrance for them when they die. While this Asian cultural tradition was formalized in places like China and Vietnam through a Confucian ideal of maintaining an orderly society through right relationships, filial piety is a value that is accepted by many other Asian and Pacific Island communities of other traditions where loyalty between parents and children is deeply felt. This loyalty extends to the responsibility of paying respect and reverence to all elders and ancestors. These expectations may not be clearly spelled out to the second and subsequent generations, but second-generation children often feel an obligation to their parents, who have sacrificed much to nurture, provide an education, and pass on the faith.

The traditional Asian and Pacific Islander family may consist of several generations living under one roof. Some maintain this unity when they arrive in the United States. Others adjust to new circumstances that force them into separate households, but they remain in relative proximity to one another. Even in such circumstances, it is quite common for families and relatives to maintain ongoing relational connections throughout the year, sometimes from week to week.

Asian and Pacific Island communities consist also of transnational families living across different parts of the globe but struggling to maintain ongoing connections. The USCCB document Harmony in Faith describes the integrity of the family—fostered and maintained through a strong faith life—as a major concern of Asian and Pacific Islanders (see pp. 22-24). Many families are challenged by contemporary trends in United States society, such as a high divorce rate, lack of church participation, and the absence of a father or a mother. Some have been affected by these circumstances and fall into disintegration themselves, but others have been able to remain intact. In general, most Asian and Pacific Island Catholic families remain tightly knitted together.

Their reasons for migration to the United States and their modes of doing so (as economic migrants or as refugees) will shape their experiences in the United States. First-generation migrants and refugees will likely maintain strong emotional bonds to their homelands. These bonds further stress the duty and practice of sending care packages and substantial remittances to families and friends. They also tend to continue to practice the faith as it was experienced in their home countries, especially through church participation and domestic worship practices.

The “1.5 generation” is comprised of children who come to the United States between the ages of five and twelve. Some members of this generation may embrace a pan-Asian or a pan-Pacific Island identity, while those of the second and subsequent generations—born in the United States—may more readily subsume their Asian or Pacific Island identity within the larger “American” identity (e.g., Chinese American) or simply see themselves as “American.” Regardless of how they identify, many still find themselves caught between two cultures: their particular Asian or Pacific Island culture and the larger U.S. mainstream culture. They may wish to remain loyal to the culture and values of their parents but believe their parents’ homeland cannot be replicated in the United States. Many tend to have a strong grasp of their native language and customs, if not in linguistic fluency, at least in the grasping of particular communication codes, the appreciation of cultural practices, and the maintenance of familial customs, such as filial piety. But eventually, subsequent generations tend to lose fluency in their parents’ mother-tongue, disconnect from traditional practices and folklore, and become more drawn to surrounding cultural practices. Further, they may feel pressure to “succeed” within this mainstream culture.

Even though many Asian and Pacific Islanders are immigrants, there are exceptions, such as those from Hawaii, Guam, and the Pacific Island territories of the United States. These people are citizens of the United States and do not fit neatly into categories of immigrants, refugees, foreigners, or strangers. They, too, may experience stereotyping and discrimination and are not immune to the generational cultural struggles.

Discussions about Asian and Pacific Islanders often assume that they are newly arrived to the United States. While this may be true for some communities, many Chinese, Filipino, Indian, and Japanese Americans have been in this country for multiple generations. In fact, some Asian and Pacific groups can claim an early presence in the United States predating many European groups. For example, the first documented arrival of Filipinos in what is today the United States of America was October 18, 1587, in Morro Bay, California, and the first recorded settlement of Filipino Americans is found in New Orleans, Louisiana, in 1693. But it was the Immigration and Nationality Act of 1965 that significantly allowed the increase of the overall Asian and Pacific population by lifting the ban on immigration and eliminating previous immigration quotas. The explosion of Asian immigrants after 1965 may explain why many still view these US citizens as being newly arrived.

For first-generation immigrants, church participation remains a source of cultural pride and identity. Yet, first-generation immigrants feel they do not know how to reverse the declining trend of church participation in the second generation. Many among the immigrant generation fear there is not enough being done to retain their faith practices among the youth. Second- and subsequent generation Asian and Pacific Islanders grow up in the United States, where they encounter a series of differences with regard to the experience of church participation. Many in the younger generation do not see the church as a place for socialization; they may more readily feel at home within the larger US society. Further, they become influenced by a more relaxed attitude when it comes to participation in liturgical celebrations or other parish activities, to the lament of the first generation.

Some of these families may face challenges in working through interfaith and intercultural marriages. While second and subsequent generations have fewer qualms about marrying outside of one’s faith or ethnicity, such unions remain a major concern for the first generation. Some first-generation adults may hold a very strong view that marriage should take place either between people who share a faith or ethnic identity. Such views challenge the sensibilities of the second generation, who are more inclined to marry across religious, cultural, and ethnic lines. While the Church has concerns about interfaith marriages, there are no concerns about marriages between people of different ethnic heritages.

At the same time, church participation still remains strong among some second-generation Asian and Pacific Island Catholics, such as those in the Vietnamese Eucharistic Youth Movement and Youth for Christ, a strong tradition in the Filipino community. These two groups provide faith formation and organize periodic gatherings of young adults that create peer communities and help establish long-lasting friendships.