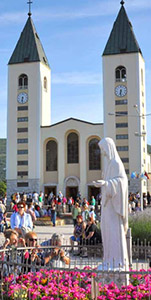 In June 1981, six children claimed to see and talk with Mary, the Mother of God, the Queen of Peace. Thirty-eight years later, those same six individuals, known as visionaries, continue to attest to these apparitions in the town of Medjugorje, located in Bosnia and Herzegovina, the former Yugoslavia. Medjugorje means “between the mounts.” The population is of Croatian nationality and the mother tongue is Croatian.

I have traveled to Medjugorje six times, the latest in July 2019.  I was introduced to Medjugorje via a book and my curiosity was ignited. The more I researched, the more fascinated I became about how six children (in 1981, the youngest was ten years old) attested to see and converse with Mother Mary. My belief strengthened when I learned about the sufferings that they endured during the period of communist persecutions, including the war in the 1990s; threatened with imprisonment and even death; they underwent numerous scientific studies to attempt to explain their ecstasies (studies were conducted by natural scientists, psychologists, psychiatrists and theologians); after being interrogated separately and in different locations, their testimonies were consistent; and they would not deny seeing Our Lady. Eventually, the visionaries were declared and certified to be normal.

Millions of pilgrims have traveled to Medjugorje and continue to do so. The official website reports the statistics for July 2019: 170,000 holy communions and 6,397 priests that concelebrated at Masses (206 per day). In Medjugorje, much time is spent praying. There are three main areas that parishioners and pilgrims spend their time: the church, Apparition Hill, and Cross Mountain. The church’s patron saint is St. James, the Greater, the Patron Saint of Pilgrims.  On a daily basis, a number of Masses are celebrated in many different languages, with the International Mass in the evening.  Apparition Hill is where the visionaries claim Mary first appeared; here pilgrims pray the Rosary as they ascend the hill.  Cross Mountain has a 26-foot cross at the top and it is where pilgrims ascend the mountain praying the Way of the Cross.

What does the Vatican say about Medjugorje? In 2010, then Pope Benedict XVI established a commission to study Medjugorje. The study was completed and submitted in January 2014. In 2017, Archbishop Henryk Hoser was assigned to visit Medjugorje a “special mission of the Holy See to inquire about the pastoral situation in Medjugorje.” He has since been assigned to live in Medjugorje for an undefined period of time.  On May 12, 2019 (Mother’s Day), Pope Francis announced that dioceses and parishes can organize pilgrimages to Medjugorje. “The fact that apparitions are still continuing is the main obstacle to a final ruling, since it’s hard to decide on something which hasn’t finished. For now, the question of recognizing the authenticity of the apparitions remains in the hands of the Secretariat of State,” wrote Archbishop Hoser.

All six visionaries are alive, married, with children, and even some with grandchildren. Three visionaries attest that they continue to visit with Our Lady on a daily basis.  Marija, one of the three, is tasked to receive and share the message of Our Lady on the 25th of each month. These monthly messages are focused in Prayer, Mass, Scripture, Fasting, and Confession.  Following is the message of August 25, 2019:

“Dear children! Pray, work and witness with love for the Kingdom of Heaven that it may be good for you here on earth. Little children, God will bless your effort a hundred fold; you will be witnesses among peoples, souls of unbelievers will feel the grace of conversion and Heaven will be grateful for your efforts and sacrifices. Little children, witness with the Rosary in hand that you are mine and decide for holiness. Thank you for having responded to my call.”

For a wealth of information, including finding the latest on the current events related to Medjugorje, I recommend the official website www.medjugorje.hr.

As a pilgrim, as a skeptic, as just being curious would you join a group of us to Medjugorje in June 2020 to celebrate the 39th anniversary? Our group’s Spiritual Director will be Father Sagay Emmanuel, MSC, Pastor Our Lady of Mount Carmel, Rancho Cucamonga.

Pam Lucero is a parishioner of St. Catherine of Alexandria in Riverside.