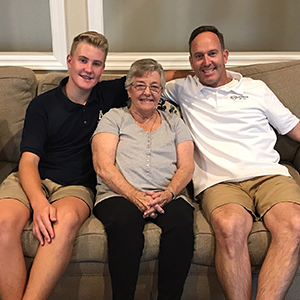 Banners, choirs, television cameras and thousands of revelers pack Raincross Square to celebrate the Ordination of the first Bishop of San Bernardino. Among the crowd is local parishioner and businessman Joseph Bonadiman.

“My husband went even though he got sick that night. I can’t tell you how sick he got!” chuckles his widow, Barbara Bonadiman. “I think he was coming down with the flu and he went anyway.”

That commitment to faith first might describe the Bonadimans in a nutshell. Four generations of the family work and worship in California, many right here in our diocese.

“I think our faith was intertwined with everything we did,” explains son, Edward Bonadiman. “We were Catholic and that was it. No ifs, ands or buts about it.”

This legacy of Catholicism stems from the love of Barbara and Joseph, married in 1958 at St. Cecilia’s Church in Los Angeles. Barbara recalls her husband as unabashed in his beliefs.

“He would stand on street corners with bible in hand and preach to people.”

After college, the young couple settled in San Bernardino County where Joseph went to work at his father’s civil engineering and land surveying business. Through the 1960’s and 70’s, the Bonadimans experienced monumental changes in the Church; the Second Vatican Council, the death of two popes, and a new diocese with a new bishop. Barbara says they respected the leadership from Pope John Paul II on down.

“[John Paul] made the Church personable to others. He wasn’t aloof,” she continues… “we enjoyed Bishop [Phillip] Straling. He’s a very likeable man. He took part in a lot of the things that we attended.”

Hardly content as parishioners, Joseph and Barbara devoted themselves to multiple ministries, like the Knights of Columbus, the Catholic Daughters of the Americas, and the Serra Club. All that while raising ten children in their beloved faith. Barbara says her kids went to Catholic school, prayed the Rosary during long car rides and never missed Mass. But getting those kids ready for Mass was quite a production.

“Every Sunday they’d get their ears clean. My husband would make sure! The girls would have their hair combed and they would wear their dresses.” Barbara laughs at the recollection but then gets serious.

“They would go to Mass and sit there quietly. There wasn’t any messing around because I’d put up the fingers one, two and I wouldn’t get to three. If they got to two they knew they were already in trouble.”

Barbara fondly remembers having private First Communions at their parish, Our Lady of the Assumption in San Bernardino. The family would fill the front pew and watch daughter after daughter (there were seven in a row) receive her sacrament, some even wore Barbara’s Communion dress. Those were also the days when people still donned their Sunday best.

“I loved wearing hats. I loved wearing veils,” enthuses Barbara.  “I miss seeing people dress up for Sunday Mass. I don’t dress up like I used to but at least I put on something that I wouldn’t wear around the house.”

Most of the grown Bonadiman children still attend church but not all. Barbara remains hopeful there’s still a spark of their faith inside them. She has no doubts however about Edward, number nine in the lineup of children. For him, Catholicism is more of a flame than a flicker. Edward not only carries on her beliefs but the family business as well. His father, who passed away five years ago, was his role model.

“My dad absolutely was the strongest Catholic man that I ever met in my entire life. Period,” Edward says with conviction. “I could see how his faith made him happy and that’s what I wanted, and so he was a wonderful example.”

At The Holy Name of Jesus Parish in Redlands Edward also continues the family tradition of being an active parishioner. He’s a member of the Knights of Columbus, a Eucharistic Minister, and the Committee Chair for the parish Boy Scouts. His wife of 18 years, Sarah, is a Girl Scout leader and a home room Mom at Sacred Heart Academy. Edward describes their four children, Preston, Landon, Morgan and Owen as “strong in their faith.” All attend Catholic school and play music in church; 15-year-old Landon rocks the guitar and drums.

“I think it’s fun,” says Landon of music ministry. “It’s a really neat way for me to feel like I have a part in the church, to feel like I’m contributing and giving my glory to God.”

Landon attends Aquinas High School with older brother Preston and is active in student council and the swim team. He says if you want to survive the teen years, get God.

“I think religion helps me and young Catholics get through the difficulties of growing up: school, and other pressures. Kids that are really grounded in their faith, fall back on their faith.”

Landon can also fall back on his grandmother since she lives next door in their Highland neighborhood. He and his siblings are among Barbara’s 28 grandchildren and nine great-grandchildren. While they may not experience the early days of the Diocese the way she did, Barbara  appreciates the activism of the modern church.

“I like that people get together and do volunteering outside the parish,” she says. “They’re out there in the community and they’re always inviting others to come in.”

Landon believes teens are part of that trend.

“I even see it in my youth group at church,” he says. “More and more young people are getting involved.”

Landon says he’ll stay engaged beyond his teen years like his father and grandfather before him.

“I’d love to get married and have a big family and get my kids involved in the Catholic Church and raise them how I was raised.”

What will the Diocese look like in another 40 years?

Barbara speculates that there will be fewer but larger churches.

“Growing up we could always walk to Mass. It will be hard for some people to walk that far, they’re getting old now. I understand we don’t have the priests to go around.”

Edward sides with his mom about the shortage of local clergy. He hopes more young people hear the call.

“We need more vocations,” he says. “We need kids to wake up and realize there’s more to life than themselves.”

Nevertheless, mother and son have no doubt about the longevity of the Catholic Church. Barbara sums it up best…

“All I know is that Jesus has promised that He will be with us and the Church will not fail.”