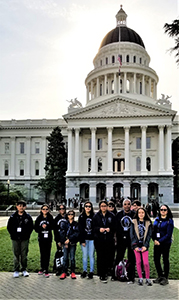 The tour began at the State Capitol Building and Capitol Park in Sacramento. We visited both the Senate Chamber and Assembly Chamber galleries, had a photo stop with the life-sized golden bear outside the Governor’s office, admired the Capitol Rotunda and its amazing ceilings. The historic rooms were especially interesting, illustrating how things were done near the turn of the century. Students saw many depictions of the California State Seal and were given details about what its various images signify. Students learned that the capitol was about to be torn down; but it was saved, rebuilt, and restored to its original grandeur only better. On the way out we wandered through the peace garden and viewed beautiful trees and plants from around the world and visions of peace from other California school children.

The next stop was Old Town Sacramento, where we got an overview while aboard a horse drawn wagon. We wandered around the shops and ended up at the Railroad Museum. It was amazing to see how the trains started and how far we have come in this mode of transportation. Our last stop was the one room school house. We experienced a day in the life school children in the 1800’s, entering the school, sitting in the desks and even participating in a lesson. It was quite enlightening, and our students were willing to go back in time. We ended the tour playing a couple of songs on an old piano that requires both feet peddling and both hands playing.

The next day we rose early and started our day at the Marshall Gold Discovery State Historic Park. While there, we heard about the gold rush, saw a video about the stagecoach, saw a replica of the area during the gold rush, went on a walking tour where we saw Sutter’s Mill. This was the place where the actual gold rush began. We panned for gold and everyone on tour returned with some gold (mostly flakes), fool’s gold (pyrite) and amethysts. Next, we had an exhibit on packing the wagon for the trip west for the gold rush.

The next day we headed in to San Francisco and our first stop was Twin Peaks, from there we visited the Golden Gate Bridge (where we actually walked out on the bridge and back), Fisherman’s Wharf, Alcatraz Island for an amazing audio tour of the entire prison grounds on the Island, and Ghirardelli Square. We ended the day with a ride on a cable car, and toured Union Square.

Our final day in San Francisco started with a walking tour of Chinatown. We walked down one side and back up the other side of Lombard Street (the crooked street), we had a photo stop in front of the painted ladies (Old Victorian Houses with the San Francisco skyline in the back).

Our last stop was the “California Academy of Sciences,” described as “the world’s only aquarium, planetarium, rainforest, and natural history museum – all under one living roof.” We spent about three hours in this museum and barely made a dent in all there is to see. There is a Living Rainforest that walks you from the ground to the top of the canopy. Then we took the elevator down to the bottom floor where we exited into an Aquarium exhibit. There is also an endangered albino alligator in the swamp exhibit.

Once we left the Academy of Sciences we headed for the airport. On the flight and ride home, our minds were full, and our bodies were exhausted. Most of the group fell asleep on both legs of the journey.