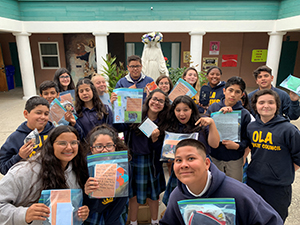 SAN BERNARDINO—The graduating eighth graders had a rare opportunity to peek into the past at Our Lady of the Assumption School.

They opened the Time Capsule prepared for them by the graduating class of 2009. Among the items enclosed was a First Communion statue with a note, “I hope to see this in the Future…” There is no name on the note, so teacher Mrs. Tish Godsy promptly posted it on Instagram for the owner to claim. Lots of “likes,” but, so far no owner.… Other items included notes to then-Pastor Father David Fitzgerald, Captain Kirk and Mr. Spock bobble-heads from the newly released Star Trek movie, Jeff Gordon’s #24 NASCAR hat, and a hand-picked CD of favorite 2009 tunes provided by then student Shanel Jugan. Some of the students enclosed their Scan-Tron testing results as an example of the high-tech level of testing at the time, and student Stephanie Rose Pine even donated her OLA Uniform!

Our current eighth grade students enjoyed seeing the items the class of 2009 picked to be remembered by. They mentioned they would include a class picture, a rosary to remind them of how they led the Rosary every morning, a volleyball, and a letter of advice to future eighth graders. The class shared that it was such a wonderful opportunity to get a glimpse into the past and see how our school has evolved, and to gather their own hopes and dreams for future OLA generations.