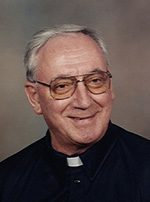 Father Edward McGuinness, 89, was called to his eternal rest on December 25, 2019 in San Diego.

Fr. McGuinness, born on June 2, 1930 in Glasgow, Scotland, was the second of 10 children born to James Gerard McGuinness and Ann McGroarty. He is survived by his sisters, Sr. Agnes, SDB, Bridie, Molly, Ann and Catherine and brother, Pat.
He was baptized on June 4, 1930 at. St. Columba Church, Glasgow and attended elementary school at St. Columba Parish and high school at Salesian Missionary College in Macclesfield, England from 1942 to 1948. He graduated from London University with a Bachelor of Arts Degree with honors in Latin.
Fr. McGuinness was ordained a Salesian Priest of Don Bosco on February 11, 1961 by Cardinal Maurilio Fossati in the Basilica of Mary Help of Christians in Turin, Italy.
He taught at Salesian Colleges in England and Ireland from 1961 - 1971, was director of Home for Deprived Children in Glasgow, 1972-1979 and Department Head of Religious Education in Salesian College in London from 1979-1981.
Fr. McGuinness was granted permission from the Holy See to transfer from the Salesian Society to the Diocese of San Bernardino and was incardinated into the Diocese on October 18, 1984.
He served as associate pastor at St. Marget Mary, Chino and Sacred Heart, Redlands. He was Administrator of St. Joan of Arc, Blythe from 1984-1986, Pastor at St. Peter and St. Paul, Alta Loma from 1986-1992 and at St. Elizabeth of Hungary, Desert Hot Springs from 1992 until his retirement in 2005.
Mass of Resurrection was on January 2 at Our Lady of the Rosary Cathedral in San Bernardino, burial was at Our Lady Queen of Peace Cemetery, Colton where he was interned next to his brother Fr. Gerry McGuinness.