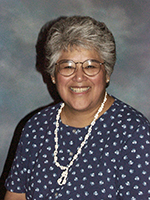 Sister Alice Molina, RSHM, 71, was called to her eternal rest on December 27 in Orange.

She was a member of the Religious of the Sacred Heart of Mary for 50 years. In the Diocese of San Bernardino, Sr. Alice served as the first Director of the Diocesan Department of Ministry of Educational Services (1997-2009). At the same time, she directly managed the Diocesan Office of Catechetical Ministry and the Ministry Formation Institute. Of her many concurrent responsibilities in religious education and faith formation she once said, “I looked at it as an adventure of creating something new.” Her ministry also included religious education work in the Archdiocese of Los Angeles and the Dioceses of San Jose and Tucson.
Sr. Molina is survived by brothers Tony, Richard and John and sisters Christine (Rodriguez) and Mary Louise.
Mass of Resurrection was on January 13 at St. Alphonsus Church, Los Angeles with burial at Calvary Cemetery, Los Angeles.