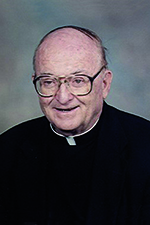 Father Richard Humphreys, 88, was called to his eternal rest on January 11 in Perris.

He was born on June 18, 1931 to Dr. and Mrs. Despard and Eva Mae Humphreys in Oxnard and was baptized in 1931 in Transfiguration Church, Los Angeles.
He attended Transfiguration School, Los Angeles from 1938-1945 and Loyola High, Los Angeles from 1945-1949. He attended Los Angeles Minor Seminary from 1949-1951 and St. Patrick’s Major Seminary from 1951-1955 graduating with a Bachelor of Arts Degree.
On completeing his theological studies at Immaculate Heart Seminary in San Diego (1955-1957), Fr. Humphrys was ordained a priest at St. Joseph Cathedral in San Diego on March 19, 1957 by the Most Reverend Charles Francis Buddy, D.D. for the Diocese of San Diego.
Fr. Humphreys began his priestly ministry at St. Joseph, Barstow. He served in the then San Diego Diocese as an assistant at St. Vincent, San Diego, St. Anne, San Bernardino, Our Lady of Perpetual Help, Indio, Holy Rosary, San Bernardino and Our Lady of the Rosary, San Diego. He served as pastor at Our Lady of Light, Descano, St. Joan of Arc, Blythe, Our Lady of Soledad, Coachella and Our Lady of Angels, San Diego. He was on the faculty of Aquinas High School, San Bernardino and Chaplain at St. Bernardine Hospital, San Bernardino.
With the establishment of the Diocese of San Bernardino in 1978, Fr. Humphrys was incardinated into the Diocese of San Bernardino and continued his priestly ministry as Associate Pastor at St. Joseph, Upland, St. Frances of Rome, Wildomar, and as pastor at Christ the King, San Bernardino (1982-1994) and St. Charles Borromeo, Bloomington in 1994 until his retirement in 2014. In his retirement he resided at St. James the Less, Perris.
Viewing and Vigil service was on January 22 at St. Charles Borromeo, Bloomington with Funeral Mass the following day at St. James, Perris. Interment was at Our Lady Queen of Peace, Colton.