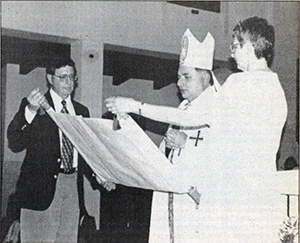 To newly appointed Ordinary, Gerald Barnes, the fabric of his Diocese was vibrant and colorful—but it lacked a common thread.

So when he assumed leadership of the Diocese in 1995, he said it was critical to continue the consultation process begun under his predecessor, Bishop Phillip Straling, that would lead to a shared statement of vision for this local Church.

“It was like a scattering of a lot of things that did not sense yet a direction that they all had in common,” Bishop Barnes recalls. “Everybody was doing something good but we weren’t tied to each other.”

Bishop Barnes had been centrally involved in the consultation process when he was Auxiliary Bishop of the Diocese so he was able to “take the baton” from Bishop Straling and move forward with the second and third phases of the process smoothly. At the same time, his own spirituality began to inform the visioning process in new ways. He insisted that every effort be made to include groups that had been traditionally under-represented in Diocesan dialogues. And he asked those charged with writing down the vision that it imagine a Church present in all aspects of life and community.

“He wanted every group participating,” says Sister Mary Jo Nelson, OLVM, who served as Diocesan Director of Pastoral Planning and was the director of the Planning Council created to shepherd the Visioning process. “We wanted everybody listening to each other as well as contributing.”

The consultation process began in 1995 and involved listening sessions in every Vicariate of the Diocese, written surveys, and education and training programs offered by groups like the Mexican-American Cultural Center (MACC). Sr. Nelson said Bishop Barnes urged the members of Planning Council to craft a Vision that directly reflected the hopes, dreams and concerns of the people of the Diocese that had been involved.

“This was a vision that didn’t come from the top down, it came from the bottom up,” Sr. Nelson said. “It was probably the most exciting time I have seen among the people of the Diocese.”

On May 20, the Feast of St. Bernardine, in 1997, a Vesper Service was held at Our Lady of the Rosary Cathedral to unveil the newly-crafted Diocesan Vision. Distilled as a written communication from Bishop Barnes, the vision included seven areas of concern – Youth, Evangelization, Unity in Diversity, Stewardship of Resources, Leadership, and Organizational Structures. Father Bob Miller, also a member of the Planning Council, said those seven areas of concern had been identified and reflected upon with the parishes and schools of the Diocese during the first phase of the consultation.

The document unveiled on May 20 also included the now familiar 33-word statement of Vision;

“We, the Church of San Bernardino, are a community of believers in Jesus the Christ, called to impact family, neighborhood, and society with the Gospel so that people’s lives are filled with hope.”

Fr. Miller and Sr. Nelson agree that the short statement was reflective of Bishop Barnes’ view of Church.

“It came from him,” Fr. Miller said. “That was really Bishop Barnes’ summary of what he saw in the process.”

The specific mention of where the Church would make its impact – family, neighborhood and society – was significant, Sr. Nelson said.

“He has always been a bishop who saw Church as being big and inclusive,” she said. “Church is where people are and where they do the work of the Gospel.”

At the May 20 Vesper Service, a scroll with the Bishop’s words was passed forward from the back of the Cathedral by attending Catholics until it reached the Sanctuary where Bishop Barnes read it.

Following the release of the Diocesan Vision, which was printed in a small bilingual booklet and distributed in all parishes and schools, the Planning Council continued with the third and final phase of the consultation. It was designed to identify the action steps that would make the vision a reality. In December of 1997 Bishop Barnes announced five goals related to the previously identified areas of concern for the coming five years. They were to focus ministry on the needs of families; create a place in the local Church for youth; develop new ways for the faithful to share their time, talent and treasure; develop new lay ministry formation opportunities; and to build structures and systems that foster genuine dialogue and collaboration.

The third phase also produced Four Core Values designed to guide the ministerial and pastoral work of the Diocese. They are Hospitality, Faith-Sharing, Reconciliation and Collaboration.

Laura Lopez, now Director of Pastoral Planning for the Diocese, was just beginning ministry work in the Diocese at the time of the Visioning process. Until Bishop Barnes shared the Vision, she said she and others with whom she was working saw their ministry as only to other Hispanics.

“He said, you’re more than that,” Lopez says of how she heard Bishop Barnes’ message. “You belong to a big family that has a lot of different people who are all loved by God.

“It was a big challenge for us. It pushed me to see things.”

Twenty years after the Diocesan Vision was first articulated, its concerns, dreams and call to unity are seen and lived.  Fr. Miller cites the focus areas on Youth and on Unity in Diversity as being especially prophetic of what the Diocese has become.

“There’s still mileage to it,” he says. “It still fits what we need to do.”