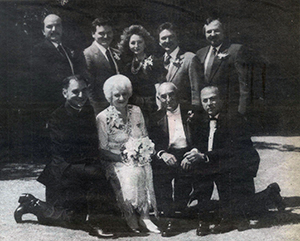 There are 50 U.S. states, but for Bishop Gerald R. Barnes, the majority of his life has revolved around only two—California and Texas.

Bishop Barnes was born on June 22, 1945 to George and Aurora Barnes in Phoenix, Arizona.

He was the second of seven children. After World War II, George and Aurora came to southern California, settling in the Boyle Heights community of East Los Angeles.

The Barnes family opened a grocery store that they operated for over 30 years. Bishop Barnes remembers that the entire family worked at the store and it was a way of bringing the family together. The store also brought the reality of the local neighborhood to the young son as he met people who were struggling with social and economic needs. The Bishop has publicly cited his parents’ modeling of Catholic values in his boyhood years as having a deep impact on his spirituality.

“One of the greatest gifts I received from my parents was their example of hospitality and charity when it came to people in need,” he wrote in a Christmas reflection for the BYTE. “It was not uncommon for my dad to bring home someone from my Boyle Heights neighborhood who needed something to eat or a place to rest. My mother was always there with a warm welcome.”

Indeed, Bishop Barnes grew up in an active Catholic family who attended Church regularly and recited family prayers. He later would credit the Our Lady of Victory Knoll religious community for their strong influence on the development of his faith through the catechetical program at the parish. Bishop Barnes was the only child in the family to be an altar server at the local church.

After he graduated from Roosevelt High School, Bishop Barnes studied Political Science at California State University, Los Angeles. Upon graduation, he took his first step toward a career in education by becoming a student teacher. It was during this time that his vocational calling to the priesthood began to emerge.

After initial studies in St. Louis and Dayton, Ohio, Bishop Barnes enrolled in Assumption Seminary in the Archdiocese of San Antonio, Texas. He was ordained by Archbishop Patrick Flores on December 20, 1975 at the age of 29.

As a young priest, Bishop Barnes was assigned to parishes in some of the poorer neighborhoods of San Antonio. His commitment to social concerns and community involvement would grow during these years. In his next ministry assignment, Archbishop Flores appointed him as Director of the Archdiocesan Catechetical Center. Several years later, Bishop Barnes would serve as the Director of Clergy Development in the Archdiocese. His dedication and commitment to the priesthood of the Church would culminate in his appointment to be Rector of Assumption Seminary in San Antonio.

In 1992, after seventeen years as a priest in the Archdiocese of San Antonio, Bishop Barnes became the first Auxiliary Bishop in the young Diocese of San Bernardino.

When asked about his episcopal ordination at the time, Bishop Barnes commented that “Life is a series of new beginnings. At the same time, I am returning to the place I call home—the Los Angeles area.”

Peter Bradley is the Archivist for the Diocese of San Bernardino.