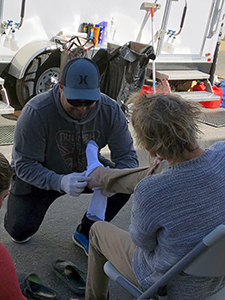 Parishes, Catholic Charities launching shower ministries to serve those in need
Share This

RUBIDOUX—With an increasingly visible and growing problem of homelessness in the communities of the Diocese, a handful of parishes along with Catholic Charities San Bernardino-Riverside are launching a new ministry to address a fundamental need of those who live on the streets.

Since mid-January, St. John the Evangelist parish in Rubidoux and Catholic Charities have been jointly operating a mobile shower ministry.

“It’s a core service,” says Catholic Charities CEO Ken Sawa. “It sends a message of caring from the community to the homeless.

“Everybody needs a shower.”

Michael Andujar Anderson, a homeless person in Riverside, said he welcomes the opportunity to come to the church and clean up.

“My personal hygiene is important to me,” he says. “Staying clean and not smelling bad.”

Sawa worked to secure a donation to purchase the mobile shower unit, which has two stalls for men and two stalls for women, separated by a wall. The ministry at St. John the Evangelist takes place every Thursday from 9 a.m. to noon. On Feb. 20, the parish had its highest total with 15 showers given. Other Riverside area parishes like St. Andrew Newman Center and St. Catherine of Alexandria are collecting and assembling items for hygiene kits that are distributed on shower days.

Father Guillermo Martinez, MSP, pastor, enthusiastically agreed to provide a host site for the ministry. Volunteer parishioners from the parish cook and serve food on Thursday mornings, and they collect and distribute clothing so that those who come for a shower also get a meal and a change of clothes.

Marinee Orozco, a Eucharistic Minister at the parish, decided to get involved in the mobile shower ministry, too.

“I like to put into practice what I’m learning in church,” says Orozco, who participates along with her husband, Jorge.

St. John the Evangelist isn’t the only parish offering a mobile shower ministry. The Holy Name of Jesus parish in Redlands offers a mobile shower unit at its Columbia Street site on Monday mornings in conjunction with its AJ’s Kitchen food pantry. The parish provides the location for the showers - partnership ministry with Family Services Association and Refresh and Renew. About a dozen parish volunteers participate each week, distributing clothing, hygiene kits and cleaning the showers after they have been used. They also find more time to interact with the homeless brothers and sisters.

“Our people are sitting down with them and ministering to them,” says Rick Ferguson, Holy Name of Jesus parishioner and an organizer of the project. “They’re finding out about their stories, they’re talking about God. Believe me, we’re getting as much out of this as they are.”