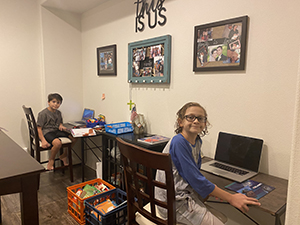 In the Catholic schools of the Diocese, students, teachers, parents and administrators are adjusting to a new way of experiencing Catholic education.

Due to Diocesan directives as well as county and state public health regulations, all 26 diocesan schools are offering their education remotely this semester.

The remote learning approach has been termed by the Diocesan Office of Catholic Schools as Catholic Online Synchronous Learning (COSL),

“...first, to identify as Catholic and what we do is with our Catholic identity, and also for parents to realize that it’s synchronous, which means there’s going to be a lot of one-on-one, live teacher-student interaction,” said Maribel Arguelles, Associate Superintendent in the Office of Catholic Schools, explaining COSL.

Schools are hoping that offering synchronous virtual instruction eases the burden on parents and helps students feel some sense of normalcy.

Arguelles said that local Catholic schools are better prepared for online education this semester than last, when they were forced to pause in-person instruction in March with very little notice.

“We had to deal with some students not having the devices yet [last semester], we had to deal with [Internet] hotspots, making sure everybody had the ability to get online, and then it was also a struggle for parents, immediately knowing how to make sure they had babysitters or taking care of their own kids,” said Arguelles.

On the positive side, all high schools and some elementary schools already had devices like iPads and Chromebooks for each student before the pandemic, which eased the transition to virtual learning.

Aquinas High School in San Bernardino was one of those schools.

“Fortunately for us ... a handful of years ago, we went to a one-to-one iPad program with all of our students, and we’ve received several awards from Apple for our implementation of the iPad program,” said Chris Barrows, principal of Aquinas High School.

Aquinas students were also already used to turning in assignments digitally. “When we made that transition [to online learning], our kids and our teachers were already really used to using those types of tools,” said Barrows.

At Aquinas, students receive about 15 hours of synchronous instruction per week.

Barrows said students, including his 10th grade daughter who attends the school, seem to enjoy the schedule. He added that the school surveyed parents and found that over 90 percent approved of Aquinas’ online instruction model.

Catholic life has also remained strong at Aquinas. Mass is live streamed every Friday, and students participate in virtual meetings for faith sharing or praying the Rosary.

Tom Strickland, principal of St. James the Less School in Perris, said he attempted to keep things as close to normal as possible when the school shifted to virtual instruction, opting to use the same learning programs that students were already familiar with rather than introducing anything new.

“When [students] went home ... they were able to access the exact same programs they have done here, so the transition was very easy as far as that was concerned,” said Strickland.

Another big help was that the school already had Chromebooks for students.

The school day at St. James is from 8 a.m. until 3 p.m. with optional tutoring afterwards. To avoid screen fatigue, there are frequent breaks.

St. James teachers Cecilia Bowes and Maria Garcia said that the school year is going well so far. Both come to St. James’ campus to teach from their classrooms.

“We can’t make it the same, because it isn’t, but we are doing our very best to cover the material,” said Bowes, who teaches first and second grade.

“We’re adding some fun things ... to keep [students] engaged so that they keep their little spirit because they all want to come back [to in-person learning], so we understand that,” said Bowes.

Bowes and Garcia have found it difficult at times to keep the children focused. “They’re very little, and it’s difficult for them to sit for long periods,” said Bowes. When Bowes sees her students getting restless, she’ll have a break from class or have them stand and stretch.

Another challenge with teaching virtually is finding ways to implement hands-on learning. “With the lower grade, it’s so hands-on ... everything is touching, counting, feeling, and it’s hard to do that when they’re at home,” said Garcia, who teaches transitional kindergarten and kindergarten.

To help with this problem, Garcia gave out classroom equipment to students to take home, including counters, crayons, markers and scissors.

“We are teaching everything that needs to be taught, we’re meeting all the standards ... it’s just a little different,” said Garcia.

While the school day may seem long at times, Bowes and Garcia said that students are doing well with having a routine.

Parents also seem to appreciate having structured time for their children to be in class.

“I’m a high school teacher and so during the day I’m teaching my own classes,” said Sara Huerta, whose two children attend St. James. She initially worried that her children would interrupt her when she was working but found that the structured school schedule kept her children occupied throughout the day.

“I think [the school year] is going great. I mean, obviously it would be best for kids to be in a classroom, but considering the circumstances, I think the setup that they have now is as good as it’s going to get,” said Huerta.

Irene Templeman, whose two children attend St. Hyacinth Academy in San Jacinto, also appreciates their school having synchronous learning, as both she and her husband work.

“Their teachers are on with them the entire day. So that’s definitely a huge plus, that the teacher is there available to support them,” said Templeman.

Templeman said that in addition to the school’s religious aspect, she believes St. Hyacinth offers a better academic experience than a public school. “There’s more rigor ... they are still getting a really good education even though it’s virtual,” she said.

Not all parents, however, appear to share Templeman’s opinion on the distance learning approach in the Catholic schools –  enrollment at Catholic schools in the Diocese has dropped by about 19 percent this school year.

“It was either not being able to pay tuition and childcare at the same time, the belief that they would get the same thing in public school and just, they want the normality [of being in-person],” said Arguelles.

Because of the enrollment decline, about 18 percent of Catholic school employees were laid off.

Despite being virtual, the education at Catholic schools is valuable and unique because of real-time instruction, community events, a focus on Catholic identity and a personal touch from teachers, said Arguelles.

“Our teachers…want their students to succeed, and how to be there with them through their emotional and social challenges, virtually, is something that they’ve been great at ... the one thing that our Catholic schools are very good at is building those relationships,” said Arguelles.

A sixth-grade teacher from St. Adelaide School in Highland, Mary Pettitt, misses seeing her students in person and being able to do hands-on science projects with them. “It’s not as fun as having [students] in the classroom, and I miss being able to go from desk to desk and to talk to them individually,” she said.

Still, Pettitt thinks keeping school online is the right decision, especially since she and her husband are considered at-risk due to age and health conditions. “I do not feel safe going back to the school. I wouldn’t survive [COVID-19] if I got it ... I can’t risk getting it, I can’t risk bringing it home,” said Pettitt.

While nearly all school activities remain virtual, there are some exceptions.

High school sports teams are allowed to hold conditioning workouts in small groups with no shared equipment. The hope is that competition can begin in the spring.

Additionally, Coadjutor Bishop Alberto Rojas, who now directly oversees the Catholic schools, recently approved plans to allow students with disabilities to return to campuses for support and services, one-on-one or in a small group, following safety protocols such as wearing masks and social distancing.

Regarding the return to in-person learning, Arguelles said that most schools’ reopening plans have been submitted and approved, but the timeline for the plans to be put into action has not been set. “Bishop wants to ensure ... preservation of life as much as possible,” she said.

“I think [COSL] is the best alternative that we have to normality. I know our parents want our students back in the classroom or at school, but even when they return ... it’s not going to be normal for a while,” said Arguelles.